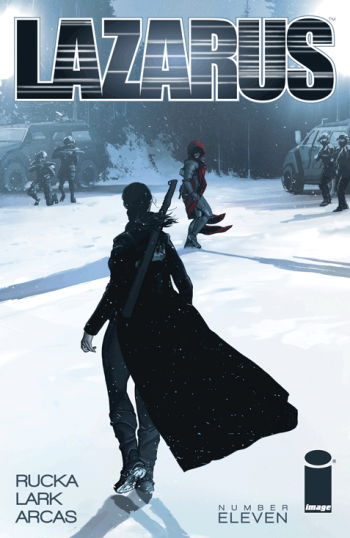 Enemies are scheming on every side, but the seeds of doubt growing in Forever Carlyle’s mind may be the most dangerous of them all.

Corporations have replaced governments in Greg Rucka’s hard science fiction series Lazarus, and all the grey shades of dystopia are present in the world that results. All of the money, and therefore the power, is concentrated among 16 families who have divided the world into their territories. The rest of us are either lucky enough to be Serfs, the skilled workers that the family values, or we live out our lives as Waste, little more than human nuisance. In Lazarus #11, the 16 families are about to come together for a conclave, their first meeting since the world was divided up among them. The conclave was prompted by the a ransom demand for Jonah Carlyle, the traitorous son of Malcolm Carlyle, who is now in the hands of his enemy, Jakob Hock.

Writer Greg Rucka explores what the world would look like with corporations, controlled by powerful families, in charge of everything. The wealth divide in the world of Lazarus is a chasm, with those at the bottom scraping by and those at the top having access to every innovation, luxury, and advancement. Lazarus follows Forever “Eve” Carlyle, who serves as her family’s Lazarus, a sort of super soldier. Every family has one, and the Lazarus is charged with the protection of the family and its lands.

In issue #11, Forever is really beginning to doubt what she is and what her place is within Carlyle. She’s been raised to believe that she is the daughter of Malcolm and Abigail Carlyle, genetically enhanced and trained to serve as the family’s Lazarus, a powerful protector meant to defend the family, command its armies, and maintain its security. The series so far has alluded to the fact that Forever is not exactly what she’s been told, but it’s not until Forever receives a strange message from an unknown sender that she begins to question her place in the family.

Forever suspects the message is from her traitorous brother Jonas, meant as a final turning of the screws. When Forever asks about her birth, her sister assures her that she is really Carlyle, but Forever isn’t satisfied. Wondering the compound where she was raised and trained to fight, she runs into her old mentor, Marisol. Marisol is 90, but she looks barely 40. The Carlyle medical magic works well for those who can serve the family. Forever trusts Marisol more than even her sister, and show her the message: “He is not your Father. This is not your Family.” Forever confides in Marisol that she hasn’t told anyone about the message, or her concerns, but then an urgent request comes in from the border.

Sonja Bittner, Lazarus for the Bittner family, has arrived at the outskirts of Carlyle territory, and she’s demanding a meeting with Forever. Sonjua is the third Lazarus we’ve seen. The second was Joacquim Morray, the Lazarus for the Morray family, back in issue #4. Morray and Carlyle haven’t been exactly convivial, but things have been better since Jonah’s plan to drive the two families into war failed. Bittner, on the other hand, is allied with Hock, Carlyle’s main enemy. Sonja looks like a walking plate mail suit of armor with a courtesy cloak, though she’s later revealed to be at least partly flesh and blood, despite my hopes for a more mechanical Lazarus. (And, as a bit of an aside as a sword geek, oh man, look at those fancy little tipped up ends on the crossguard, that would make for some painful eye-gouging, and that blade length looks like it’s somewhere in between a longsword and arming sword, probably good for close combat.) Forever is whisked away from the compound to meet with the Sonja, who delivers Jonah’s finger on behalf of Hock. Forever discusses the situation with her father, and they call for a conclave to discuss the ransom, rather than pay it or go to war. 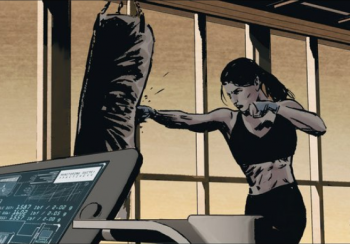 The art, by Michael Lark, with Tyler Boss joining this issue on inks, delivers a detailed, highly technological future. Most of what we see is through Forever’s eyes, a bleak and lonely world populated by a few loyal people, and that loyalty and certainty is beginning to fracture. We hardly see Forever’s face straight on in this issue. Normally very direct, she’s turning away from the people she’s speaking to, declining to make eye contact. Lark’s subtle but effective characterization communicates exactly how Forever is feeling, without resorting to detailing her every inner monologue.

The series spends a lot of time focused on Forever, and it’s worth talking about how Lark draws her. She is a fighting machine. Forever has worked and trained and exercised to be a vessel for violence, and Lark shows it in her muscles, her poise, and her shape. Her abs are defined, her biceps bulge out, her forearms are chiseled. She is lean and muscled, made for delivering pain, and she is tall. She towers over the Serfs who serve her family. She looms over her parents, her siblings, and her teacher, also a woman with undeniable raw physical strength.
Santi Arcas’s colors also highlight the stark differences between how the family lives, how Forever is feeling, and the world at large. LEDs and skin, blue and brown, are juxtaposed and combined, delineating where human and technology interface. In issue #11, Forever is struggling with her identity, and the colors reflect that, painting her and her family’s compound in muted tones. When Forever goes to meet the Bittner Lazarus, a task she is familiar with, she steps out into the wilderness, where things are clearer. When Forever arrives, she knows her place in the world, and faced with Bittner’s Lazarus standing ready with a sword dripping in blood, things get crisp, black, and white.

One of the outstanding parts of the writing in Lazarus is how Rucka is using Forever’s Father, Malcolm Carlyle. Through Malcolm, Rucka reveals details of the world that the characters we’re interacting with should already know, by having him quiz his daughter, Forever. It’s a narrative device, but it fits so well with what we know of Malcolm that it doesn’t stand out. He’s the type of person who never seems to have conversations, only scripts that he’s written well in advance, holding complete control over what happens in life and home. It makes sense that he would constantly be making his children prove themselves to him, and that he would quiz Forever in particular.

Lazarus feels like a novel being presented serially, so jumping into the series without the background will leave you confused. The issues feel complete on their own, and issue #11 in particular reveals much more about Forever’s character, but it is in no way a standalone story. The first two trade paperbacks (Family, issues #1-4, and Lift, issues #5-9) will bring you nearly up to current, with just issue #10 to grab singly. The next issue, due out October 15, will bring all the families together at the conclave. Unfortunately, the trades lack some of the extra content that expands the world of Lazarus, normally included at the back of the single issues. This extra content includes family histories, symbols, major historical events and old advertisements for the family corporations, all of which add to the richness of the world. All of this additional material will be included in the hardcover edition, coming this November. The hardcover edition will collect issues #1-9, and also include brand new material, such as a map of the world.

Recommendation: Lazarus is building a massive and intricate dystopian world, with references to the science fiction greats, today’s cutting edge technology, and current social issues, all built on the powerful shoulders of Forever Carlyle. Rucka and Lark present a deeply researched, immersive world with just the right amount of paranoia, mystery, and social commentary. And swords.

Bottom Line: If you like your futures bleak and your bio-engineered warriors questioning, Lazarus is the book for you, but you might want to wait for the hardcover edition to collect all the juicy extra tidbits.

8 MMOs You Really Should Be Playing

Jetpack Enables Anyone To Run A 4-Minute Mile