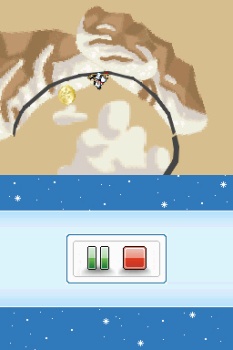 Rocketing down a snow-packed slope on a piece of cheap plastic, a cafeteria tray or some other haphazard device is one of the cold-weather delights enjoyed by northern youth. When the land you live in turns into a sub-zero arctic mess for five to six months out of the year and your folks have put a temporary ban on the household videogame console, wild rides down hastily constructed courses assembled on snowy afternoons are often the preferred way to pass the time outdoors. The crazy sledding shenanigans found in Line Rider are exactly how I always imagined those chilly New England days in wintry exile should have played out.

The original Line Rider, a free, sled-centric physics toy released in flash form on the internet several years ago, was a bundle of addictive indie brilliance that hinged on a marvelously simple concept. Using a basic set of drawing tools, you create a sloped track for a little guy on a sled to race down. The freedom afforded by the toolset and the unique physics engine led some wildly imaginative and artistic users to create extremely elaborate worlds for their rider to sled along in. The intensely detailed sled-able works of art one could create made the otherwise primitive program hugely attractive.

Line Rider 2: Unbound is a different animal altogether. Despite the moniker, it’s the first commercial edition to be released on major gaming platforms. The transition from a mere plaything to a more substantive game is fairly successful, and the DS version gets bonus points for its portability. However, in an attempt to enliven the minimalist experience and make it more marketable, inXile entertainment inadvertently sucks most of the soul and artistry from the original in the process. The first signs of this are immediately and painfully apparent.

Obnoxious techno music, dopey cartoon characters, atrociously rendered cut scenes and the insipid narrative haphazardly tacked onto the so-called story mode of the game are a huge distraction from the actual enjoyment to be found deep within the gameplay itself. You play as a doofy sledding do-gooder who’s trying to keep some bully (another sledder dressed in black with a skull emblazoned on his sled) from stealing your girlfriend (a bleach blonde, pink-adorned sledder). Much like the Wile E. Coyote and Road Runner cartoons of days past, the bratty villain’s frequent attempts to take you down continuously backfire. It’s best just to block the story out completely and move on. I almost prefer the visual sparseness of Line Rider to the hokier aspects of Unbound‘s presentation – the basic, snow-covered landscape, made up primarily of rocks and clouds, is far less offensive. 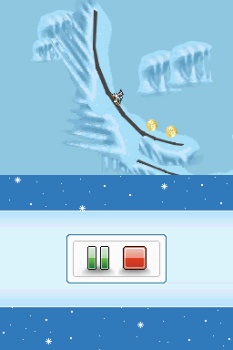 Aforementioned atrocities aside, the puzzle-focused gameplay in the story mode is quite solid. You’re given a series of pre-made tracks with large chunks missing. The goal is to creatively fill in the blank areas with your own line design elements in order to safely navigate the course, collect a number of medals along the way and land in the finish zone in one piece. The trial and error nature of the gameplay can be frustrating at times, but it’s also very rewarding to overcome a particularly tricky course. The cut scenes you’re treated to for completing different tiers of tracks are more of an insidious punishment than a reward for your efforts.

There’s an option to create your own puzzle tracks for others to play, but the freestyle mode is where fans of the original will thrive. Freestyle does away with all of the lame trappings and gives you a blank canvas to doodle and concoct your own courses. The stylus-driven design interface is very versatile, and the expanded toolset adds trapdoor lines, breakable lines, trampoline lines and other elements to improve your courses. Unfortunately, the game imposes a limit on the amount of lines you can draw within any given area of the map. Doodling too much in any one spot causes ugly caution signs to sprout up to warn you when you’re about to run out of line. These irksome admonitions don’t appear when the tracks are being played, but they’re nonetheless unpleasant limitations.

The ability to upload freestyle content you’ve created using Nintendo Wi-Fi Connection gives you the chance to flex your creative muscle for others to enjoy. In the same manner, downloading and playing other people’s creations is a lot of fun. There’s not a ton of downloadable content online yet, but a few crafty players have put together some interesting courses, proving it’s possible to whip up some intriguing and complex tracks even with the DS’s limitations.

At its core, Line Rider 2: Unbound has many of the same addictive qualities as the freeware game that inspired it. It’s too bad you have to suffer digging through several layers of garbage to get to the good stuff. The powerful draw of the original Line Rider speaks for itself. By dropping the unnecessarily garish frills of the first retail release and going with a more streamlined presentation with extra room for creating bigger tracks, inXile entertainment could have had a real sleeper hit on its hands. It may not have been as commercially viable, but it would still have soul – and that’s what players want.

Recommendation: Skip it. There is some worthy gameplay buried in Line Rider 2: Unbound, if puzzles are your thing. However, the original freeware version is still the place to go to let your creativity flow.

Nathan Meunier once smashed his face on the ice trying to sled-surf down a frozen hill. It hurt. A lot.