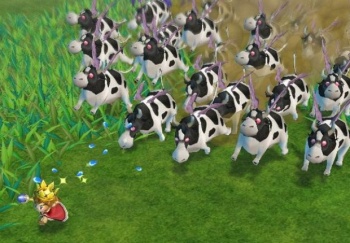 A pint-sized king with a button nose, a pink princess with hearts for hair and a quirky old knight riding a cow may not seem like characters worthy of a mature adventure. But spend some time with Little King’s Story and you’ll find an epic game worthy of the top shelf. Beneath its sugary surface lies a complex simulation RPG where a rags-to-riches king must fight for world domination.

From the makers of Harvest Moon comes the tale of a tiny boy-king with nothing but a dilapidated shack for a castle and a handful of lazy citizens to call his subjects. But with his royal charisma, little King Corobo can recruit these “carefree adults” with the tap of a button and send each and every couch potato to work as soldiers, farmers and other pursuits that unlock along the way.

After parading around as king for five to six in-game days, you receive a letter from a distant king declaring himself your enemy and claiming that you are a “world-class jerk.” Your trusty advisor, Howzer, will have none of these vile insults and instantly demands that you conquer each piece of surrounding land … which he then illustrates using a chalkboard and kindergarten-like drawings. So with a troop of faithful servants behind you and some lovely Nutcracker ballads playing to your squeaky footsteps, you set out to conquer the world.

As you gradually take over the surrounding areas, you’ll be able to purchase upgrades that will transform your kingdom from a shantytown into a regal city. But building a worthy kingdom doesn’t simply involve fine housing and rich citizens. With more money and influence, you will also unlock new classes, discover new areas of the map and be able to accept more challenging sidequests and story missions.

Customizing your city and fitting your loyal warriors with gear for the next big adventure gives Little King’s Story a renewed appeal each time you flip on the Wii. But the satisfaction of progress wouldn’t send your typical reviewer into a cooing fit. For this, look to the game’s charming style and presentation.

Little King’s Story is adorable, but not in a way that will make you cower in a corner, clutching to your manly, hardcore gamer-ness. It almost makes fun of its own cuteness. For instance, Princess Apricot – a clear play off of Princess Peach – isn’t the game’s only damsel in distress. So what is the poor little tyke king going to do with the rest of his princess harem? Why, marry them all, of course! Your female minister has a few choice words to say about this, but what do you care. You’re king. Everyone has to do what you say. 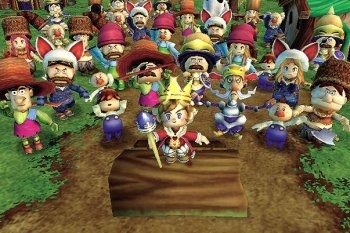 But although your slaves – er, subjects – may do your bidding, the Wii controller may not. Aside from a little repetition in the game’s combat, the controls are the biggest problem with Little King’s Story. As you explore the world, a troop of citizens will snuggle up behind you, the size of which depends on your level of upgrades. When you want them to perform a task, you have to pick a direction with the analog stick and tap B to send your followers flying forward. For instance, you can send a miner to go chop up a rock or a cook to fry up a chicken.

The analog stick, however, isn’t all that precise, and picking the correct citizen can also be quite a chore. So you will frequently find yourself sending a group of carpenters and merchants against a raving mushroom king while simultaneously asking your soldiers to charge into a wall – not very productive. When one of your guys gets damaged, he will come crying back and refuse to do anything until summoned to battle once more. So the cycle of picking a direction and sending each individual off again and again can become very chaotic during a heated fight.

Still, the game’s presentation and innovative gameplay generally outshines the frustration of command, especially as the game progresses. After building four new areas of the kingdom and upgrading your grunt soldiers to full-fledged hardened warriors, I dare you to put that controller down. The overwhelming desire to conquer the world will have you begging for a sequel.

A word of warning: Cute does not mean easy. Organizing your troops for exploration and bringing them back all in one piece can be challenging. Say you’ve got 17 spots and you need enough guys to dig holes, chop up some wood, build a bridge and climb a tree. That’s four jobs, not including the warriors, ranged hunters and doctors you might want to bring along.

The challenge of successfully conquering the world makes Little King’s Story more than just a cute adventure. But mix that tough inner layer with an inventive art style, funny characters and a pleasant soundtrack, and you’ve got a never-seen-before tale of world domination and a worthy addition to your Wii collection.

Bottom Line: Little King’s Story is a creative, artful presentation of a simulation RPG with hours and hours of exploration, quirky dialogue, upgrades, customization and all-out adventure. However, some repetitive gameplay and iffy controls bring down the experience.

Recommendation: Unless adorable RPGs make you retch, Little King’s Story is certainly worth a buy. There’s plenty to do, lots to laugh about and there frankly isn’t much like it out there.