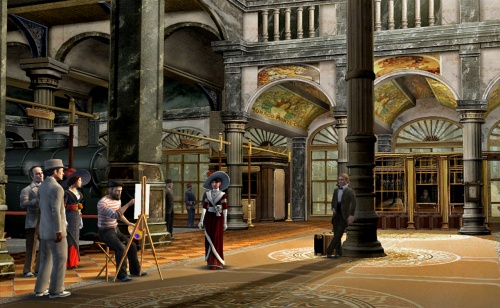 The life of a spy seems glamorous. It’s a world full of endless travel, of facades and disguises, of constant deception and redirection. James Bond makes it look easy. But in the real world of double-dealing spies, you often can’t secret away a notebook into the folds of your jacket and expect it to not be missed, and there’s often not a fancy gadget that you can easily disguise as a commonplace item. You won’t find Mata Hari wearing a shoe that doubles as a dagger or owning a pen that is also a gun.

Mata Hari is a point and click adventure game available on the PC. You play as Mata Hari, a seductress-cum-international-spy, who pits German and British government officials and influential men against each other in a power play to make more money and gain more prestige. The action takes place during World War I, in a myriad of exotic locales: Paris, Monaco, Berlin. You travel between the cities via train, a mini-game of cat and mouse wherein you must avoid the government official trying to find and arrest you. There are other mini-games, my favorite being where you must guide Mata Hari through her exotic dance routines, most of which are inspired by less than obvious sources. Let’s face it, how exactly do you turn an organ grinder or a guy riding a penny farthing into a bellydance?

The scenery of each town is beautifully done. The art perfectly captures the mystique of Paris, the exotic allure of Monaco and the prospering city of Berlin. Subtle details are what makes these towns comes alive. In Berlin, you can see a man riding a penny-farthing, the charming and laughable predecessor of the modern day bicycle. While visiting Marie Curie’s laboratory, you can spot a myriad of scientific objects, some of which are easily recognizable, but others that look obsolete and speak of a time when scientific discovery and innovation were at its peak.

Being an adventure game, there is no combat to speak of in Mata Hari. Progress is made with furtive examinations of rooms, manipulation of friends and allies and clever combination of items to procure the information you seek. Your actions as Mata Hari are exactly as you’d expect a spy to act; in secret, stealthily and without drawing any attention to your intentions. An in-game diary keeps all of your missions in order, and there are checklists so you know exactly which steps you have yet to complete.

Mata Hari has the standard actions of any decent adventure game. You collect items and information, and you must use them in specific ways in order to advance. Some of the combinations are quite obvious, but as you advance, they become trickier and require more creative experimentation. For example, while in Marie Curie’s lab, you’re asked to assist her in creating a simple solution by gathering the appropriate chemicals from around the room. The chemicals she asks for were known by other names in those days, so when she asks for a salt solution, you better believe you won’t find a bottle labeled “NaCl.” 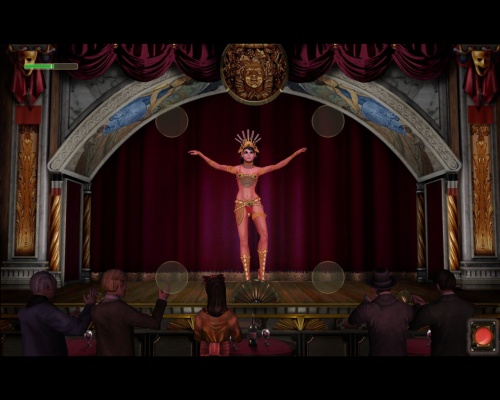 I’ll admit that the first missions are a bit simple and long-winded. The very first mission you must complete is a seemingly endless round of musical guests, where you lead Mata Hari from government official, to reporter, to spy recruiter, to the waiter in an attempt to curry enough favor amongst those in the room to convince an eminent talent agent to represent you. It’s assuredly a mechanic to allow casual gamers to get the feel of the controls, but to the more experienced crowd it may become monotonous.

Every time Mata Hari interacts with another person, there is a cutscene. It certainly helps to draw the player into the scene, but it can get a bit stale when your sixth interaction with the embassy guard elicits the same, unvaried response of “Invitation, please” any time you want to snoop around (though I guess that’s just realistic. What embassy guard worth their chops would let a person in repeatedly and without explanation? Hm…being a spy is hard). Clicking anywhere on the screen allows you to skip the small talk, though there’s a chance that doing so will cause you to miss hints and clues hidden in the conversation. I only clicked past the repetitious conversations; all others I listened to with rapt attention. The voice acting is so realistic that you feel like you’re having an actual conversation with the characters. Each character has a believable demeanor, distinctive manners of speaking and an emotive cadence.

Oh, and there’s sex in the game. No, there’s not a “use sex as a weapon” button, nor is there a sex mini-game where you must hit buttons in the right combination a la God of War. There are, however, cutscenes which show Mata Hari and her latest suitor/victim in bed, presumably after a wild night of fornication. These scenes typically segue into an opportunity for you to search the unwitting suspect’s home and dig up any goodies that you can. This presents even more challenging ways of combining items since, let’s be honest, if a lady ran off with your only copy of “Giant-Frickin’-Cannon” schematics, you’re going to track her down with vigor, hottie or not.

Historically, the real Mata Hari was accused of espionage and was executed by the French military. The player has the chance to avoid this horrific fate, but it rests entirely on making the right connections and avoiding detection. I also hear that there’s a love interest and a subsequent betrayal, which is the exact kind of soap-opera plot I can really sink my teeth into.

Bottom Line: Mata Hari is a perfect example of a point and click adventure game done right. As you progress through the game, it becomes more and more clear that Mata Hari’s life is in your hands. What you choose to do with it is up to you.

Recommendation: Buy it. It’s a great way to while away a lazy afternoon. Don’t forget the martini – shaken, not stirred.

Ten Things I Hate About You, Gaming