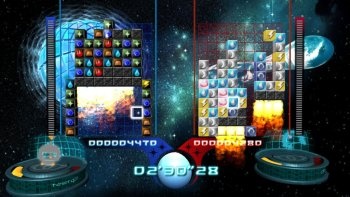 Some things were meant for the small screen. Sitcoms, talk shows and reality TV are all made bearable, even enjoyable, by television’s relatively passive presence in our lives. And if their track record on XBLA is any indicator, puzzle games are similarly suited for an existence in miniature. Tetris first captured our hearts on the Game Boy; then Bejeweled and Snood proliferated in minimized windows strategically placed around our actual work projects. That’s where they look best: next to our crosswords, Rubik’s Cubes and sliding puzzles – not on my 42-inch HDTV. At least, not yet.

Meteos Wars is an XBLA game based on Meteos, a popular puzzle game originally developed for the Nintendo DS. In Meteos, you’re an alien playing against other aliens in a falling-block-style puzzle game. You frantically move falling, colored blocks until they match three or more to a row or column. At that point, the matching set sprouts little rocket boosters that push all the blocks above it off the screen (and, potentially, onto your opponent). You travel from planet to planet battling other aliens, all of whom resemble mascots Sony might use in a PSP campaign.

With its intuitive controls, attractive styling and plenty of gameplay modes and planets, Meteos was a game in its element on the DS. It turned the limitations of the DS’s screen size into a strength by making the gameplay revolve around claustrophobic, panic-inducing puzzle solving. Meteos used packed the screen with color and action to compensate for the underwhelming sound and visual power of the DS. It stood in obvious contrast to Q Entertainment’s meditative puzzler, Lumines, and held its own.

Meteos Wars provides an equally sparse experience, but this time it’s not the result of intentional design. It’s a classic example of a half-baked attempt to cash in on a successful franchise – a Happy Meal toy without the burger. The rules of the game are the same, but it’s hard to call the gameplay unchanged with the absence of the DS’s touchscreen capabilities. On the contrary, the game has been maimed by the removal of the stylus control. People may be able to achieve similar levels of performance with the analog stick control scheme, but the frantic stylus swipes of Meteos defined the game. It’s equally frustrating that any attention to the game’s visual design has been put aside, leaving little more than grids against a black backdrop.

The big draw might have been the online multiplayer matches and rankings the game offers, but I was unable to find any opponents to play against online. I can’t help but feel that in ignoring the details that really held the DS version together, Meteos Wars was unable to capture the attention of the base audience needed for a competitive online community. Without online competition – really the only thing justifying the game’s 800 Microsoft Point cost – there’s little left to recommend. Meteos Wars is a disappointing entry in the face of its far superior progenitor on the DS.

Bottom Line: Meteos Wars is a disappointing entry in the face of its far superior progenitor on the DS.

Recommendation: Leave it. Without the online competition, this game isn’t strong enough to recommend even to those who have yet to experience Meteos

Tom Endo is a section editor for The Escapist and is pretty sure the definitive version of Tetris is the one he played on his TI-83 in math class.