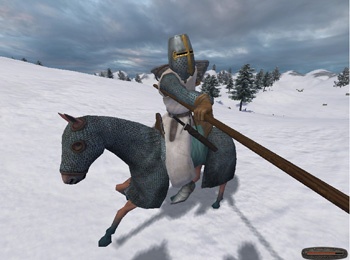 If there’s one thing you should know about Mount & Blade for the PC, it’s this: The horse-mounted combat is absolutely spectacular. Anything else one might say about the game is just an extended footnote to this overwhelming fact.

If you’ve ever wanted to experience the rush of dozens of medieval knights on horses thundering towards each other at high speeds with lances couched and various other killing implements ready to slice, chop, thump and stab, then you need to play Mount & Blade. If you’re one of the many people who bought Twilight Princess full of excitement for its promise of mounted combat and then finished the game thinking, “Really? That was it?”-you need to play Mount & Blade.

Using a lance is as easy as building up enough speed and aiming the pointy end in the right direction. Galloping around battlefields, smoking enemy troops off their mounts as you plough through their lines like a runaway train is tremendously fun. Rag-doll physics ensure satisfyingly lifelike animations for your victims who either slump over in their saddles with a deep groan of death or fall from their horses with a rewarding crunch. Hit the horse instead and it eats dirt, sending its rider flopping to the ground for your infantry to swarm and dispatch. Once you’ve mastered the fine art of maneuvering your steed-slowing down for sharper turns and swiveling the camera to line up your targets-combat shifts into top gear. You’ll be weaving in and out of the battle like a needle, stitching a pattern of death across the ranks of the enemy. Awesomeness ensues.

There’s so much fun in these moments, all of them unscripted. You’ll ride up next to a foe and land a perfect slash of your blade just as he lowers his shield to take a stab at you, painting his face red with blood. You’ll race behind a faster enemy, whip out your bow and launch an arrow straight into his back, full of pride for having successfully compensated for the distance, trajectory and speed. You’ll block blow after blow with your shield until your enemy hesitates and you seize the moment, letting his face know what your axe blade feels like.

Great sound effects immerse you in the battles. A slice or a clunk tells you whether you’ve struck flesh or shield, letting you decide if you need to pivot and strike again or continue barreling through opponents. Sieges are particularly noisy as the inevitable bottleneck at the top of your sieging ladder becomes the stage for a symphony of grunts, moans, blades clinking and arrows thwipping.

In between battles, Mount & Blade‘s campaign mode has you trotting around a map of the world Calradia, which is split amongst five factions and full of fantasy-by-numbers place names like Praven, Sargoth and Khudan. Much like Sid Meier’s Pirates, an obvious influence for the game, players are free to engage in any available activities, sculpting their own game out of the tools at hand. You can loot and pillage all you see, choose a side and fight under its king, trade goods around the continent to make money, or remain a mercenary and fight on behalf of whomever you wish. This part of Mount & Blade resembles a Sunday brunch all-you-can-eat buffet-a multitude of choices of varying quality. Some offerings will be completely ignored and others devoured, depending on your taste. 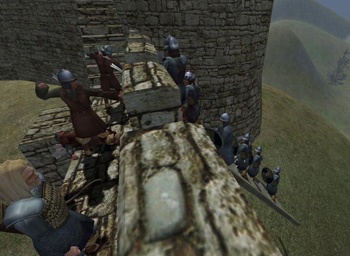 There’s no “main quest.” You just play and have fun. That’s the quest. You fight bandits for a while, and then move on to clashing with armies from opposing factions. Then you can begin conquering towns and castles for your nation, sometimes gaining ownership of them. You run little errands for village leaders and other lords to make them like you-a few heads of cattle here, training some soldiers there. You save up to buy better stuff and recruit better troops. You fight duels for ladies who have had their reputations besmirched.

It’s definitely hit and miss. Some quests are boring (I’m looking at you “gathering grain for starving villagers”), some never work properly (spies you’re supposed to follow disappear before you can go after them), and some are fun once or twice and then best ignored (finding criminals hiding in a village is the same every time). It’s also a really hard game to start, simply because you have to figure out almost everything on your own. You’ll lose a bunch of your first battles, especially before you’ve amassed a decent amount of troops and companions, and it will be really frustrating for the first hour or so. Soon, though, things settle down and you can revel in the bliss of making grown men in metal pants fall off horses.

Even the battles can start to get repetitive once you’ve got a nice, big army and adding to your win column becomes a bit too easy. At this point, you can start fiddling with the difficulty options, smartening up the enemy AI, speeding up combat or increasing the amount of damage foes inflict on you. Or you can browse through an impressive assortment of mods the Mount & Blade community has crafted to extend the game’s life, ranging from graphical updates to new items to total conversions.

In the end, letting you race a horse between enemies and introduce sharp things to their anatomy is what Mount & Blade does best. Despite the game’s other flaws, Mount & Blade‘s mounted combat is one of the most fun game mechanics of the last few years.

Bottom Line: Choose-your-own-adventure role-playing with mounted combat that all gamers should experience. If riding horses and kicking ass appeals to you, this is a must play.

Recommendation: Try it to see what all the fuss is about. You can download and play Mount & Blade for free until your character reaches level six.

Review: Murder in the Abbey