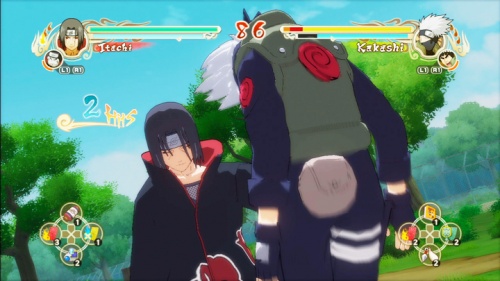 Naruto: Ultimate Ninja Storm is a gorgeous fighting game with accessible mechanics and a frenetic, exciting pace. While held down by a lot of repetitive and un-fun busywork, the biggest obstacle the game faces towards proper recognition may well be the fact that it happens to be a Naruto game.

With little to no knowledge of the manga and television show or the previous games in the series, Naruto: Ultimate Ninja Storm appears to the outsider as an anime-stylized PS3 fighter based on a superheroic interpretation of ninjas and their legendary skills. These skills apparently include summoning gigantic frogs and whirling swarms of tentacles and insects, using poisonous flowers as projectile weapons, and melding with pet dogs to form a vicious flying werewolf creature. According to some anime buffs, the show is both loved and hated as a successor of sorts to Dragon Ball, in terms of being an extremely long-running production oriented around one-on-one duels.

Naruto: Ultimate Ninja Storm‘s fighting philosophy is relatively simple compared to the thumb acrobatics required by other fighters. There is but one attack button and a jump button to form the basics, along with shurikens for ranged attacks and a “chakra” button. Most combos simply involve spamming “attack” and throwing in a direction or two to turn the combo into an air juggle or ground slam. Activating chakra supercharges drains an appropriate amount of energy from the chakra meter. A chakra jump is an unblockable dash to close distance, while a chakra attack initiates a “ninjutsu”- unique specials that stick closely to that character’s style and are very entertaining to pull off.

Pressing chakra twice triggers a high-damage “Ultimate Jutsu,” which executes via a short in-game cinematic that boasts all the screen-shaking, name-screaming, over-the-top goodness of an episode-ending strike. Opponents can actually dodge an ultimate jutsu by pulling off a screen-prompted QTE sequence as fast as they can, while the attacking player attempts the same to make sure the attack connects. When low on health, players can trigger an “awakening,” temporarily boosting attributes or swapping in an alternative move set. Support attacks from friends and items only add to the chaos.

With the diverse mechanics available, every match unfolds at a rollicking, furious pace. Players jump and dash all about the arena, spamming combos and swapping positions, dodging and throwing knives, flowers and bugs, all the while setting off supers and specials like fireworks on New Year’s Eve. As a result, speed and reaction time determines victory more often than practiced technique, which tends to put some slower characters at a disadvantage.

Naruto: Ultimate Ninja Storm presents itself very well, with cell-shading techniques to rival Valkyria Chronicles and hyperactive animation that puts to shame many 2-D fighters. Aside from some strange sound bugs and poor lip-syncing, (with both the Japanese and English voice tracks) the game performs with greater consistency and art direction, largely in part to its source material, than many AAA releases. 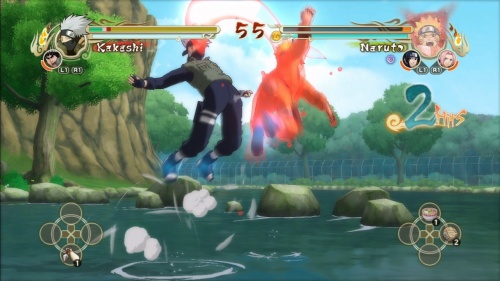 While the combat is fun and enjoyable, the rest of the game seems to be there to irritate you out of wanting to fight. Much of your playing time will be spent in single-player “Ultimate Mission” mode; unlocking characters, alternate specials, outfits and support attacks by playing missions. The plot-important “Ultimate” missions cover the first 135 episodes (yes, just the first 135) of the TV series, presented as a series of story arcs. Story arcs are bookended by cutscenes and the occasional boss battle against a massive creature, peppered with QTEs and lots of yelling.

Ultimate missions can only be unlocked by collecting “Mission XP,” points awarded by undergoing sidequests; among them practice battles, more minigames and sometimes just running a certain number of steps around the open-world mission hub. Missions can be replayed to fulfill bonus objectives which award more XP, secret scrolls used to buy support attacks, and cash to buy collectible items. Collectibles include music, figures, ultimate attack moves and, most interesting, dioramas which re-enact key moments from the TV series.

Much to the game’s detriment, this repetitive busywork gets extremely boring early on and much of it is required to start unlocking different characters and moves. How often does one need to repeat the “running through the forest” minigame and the “running up a tree” minigame before anything interesting happens? Developers should know something is wrong with their game when players would prefer a few cut-scenes rather than go through the way the campaign is designed. Simply put, the unlocking requirements demand time that older gamers don’t have and dedication that younger gamers can’t muster.

Adding insult to injury, the lack of online multiplayer or even trophies to soften the sidequests’ sting render Naruto: Ultimate Ninja Storm a fighting game strictly for families, fans, or gamers with roommates that aren’t too snooty to play a fun, great-looking “anime game.”

Bottom Line: Despite the tedium of its sidequesting, Naruto: Ultimate Ninja Storm is one of the best-looking titles on the PS3, and an exciting, accessible fighter to boot, providing a lot of content for fans to enjoy. It’s just too bad that many players will end up ignoring it because it’s based on a series they dislike or aren’t aware of.

Recommendation: Rent it for kicks, keep it if you’re a fan or have someone willing to do the unlocking for you. It’s probably the closest you’ll ever come to playing the show, at least according to my nine-year-old nephew.

Josh Tolentino appreciates his nephew’s help in writing this review, but greatly resents that same nephew’s kicking, ninja-starring, and burning his ass to a crisp. Next time, Kisame will be banned from play.