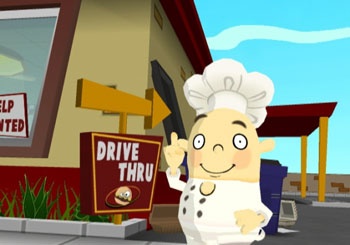 In the kitchen, my culinary abilities have always been a little lacking. Creating tasty dishes in the virtual realm holds more appeal; evidently, my cooking skills reign supreme when a controller is involved. Cooking titles are still an emerging genre on the console and handheld gaming market, but they ingeniously give non-chefs a taste of what it’s like to create something more than a peanut butter and jelly sandwich or microwave pizza. While Cooking Mama established a solid baseline for videogame food crafting, Order Up! for the Wii kicks things up a notch.

Rather than focusing solely on completing recipes to methodical perfection via a series of food prep minigames, Order Up! has you running your own restaurant and dealing with the chaos that comes along with such an endeavor. You’ll have to manage tables, cook multiple meals simultaneously, deal with staff, dole out assorted tasks, earn money to improve your greasy dive, and try to impress the local food critic, all while contending with a steady influx of unusual patrons looking for some good eats. Firing off meals for customers in a bustling kitchen with incoming orders and other problems – such as unannounced visits from the health inspector, kitchen fires, and rat infestations – makes for some exciting cooking action.

Order Up! is executed with a delightfully goofy sense of humor that pervades the entire game, accentuated by a quirky, cartoonish visual style. After selecting a chef, you’re unceremoniously ejected from an airplane to crash-land on the island of Port Abello, where you’ll have a crack at working your way up the ranks of restaurant fame. The tutorial alone is worth a few laughs and sets the tone nicely; it’s delivered by a pimply, squeaky-voiced employee at Burger Face who shows you the basics of grilling meat and making fries. You’ll soon set out on your own by purchasing a greasy spoon, named Gravy Chug, located just down the street- the first of four restaurants in the game.

Once you’re at the kitchen helm of your first dive – grimy and disgusting as it may appear – the gameplay kicks into action as customers trickle in and the waitress takes their orders.. Your job is to scrutinize the recipe for a particular order and start prepping the different components for the dish by dragging an item from the list and dropping it on the appropriate station, which triggers an ingredient-specific minigame (such as chopping, grating, breading, and frying, to name a few). Completing these tasks with accuracy and proper timing will yield delicious food and keep customers happy. After all of the different elements have been prepped, the completed dish will go up on the counter with a temperature timer that slowly ticks down until the rest of the table’s dishes are finished and they’re sent out. It’s strangely satisfying to ring the little bell to send the food out to the dining area; you’ll get feedback from customers, before they violently shovel the food into their nasty gullets. 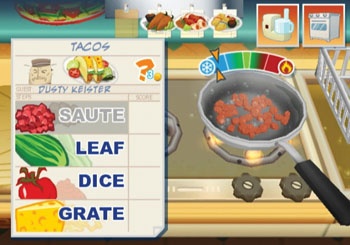 Whether it’s chopping veggies, flipping burgers, folding burritos, or grabbing a pan off a hot burner, most of the Wii Remote controls for the cooking minigames are intuitive. However, they’re not always as responsive as they should be, and this can make for a few frustrating moments when orders are piling up. Though not necessary for play, the Nunchuk attachment allows you to flit back and forth between stations with ease – extremely helpful when you’ve got chicken in the fryer, tomatoes to chop, a pizza in the oven, meat grilling, a pot boiling over, and onions sautéing all at once.

Working on multiple dishes simultaneously can get crazy when you’re plating for a table of four and each recipe has numerous steps. Fortunately, hiring sous-chefs allows you to delegate some of the grunt work, and you can select from a dozen or so different potential employees who have their own areas of expertise.

At the end of the shift (typically after you’ve served around five or six tables) the day’s receipts are tallied up. Your hard-earned money can be spent on unlocking new recipes, buying spices, upgrading equipment, and hiring new staff, among other things, including eventually buying new restaurants. New eateries (each with their own theme) aren’t available for purchase until you complete certain tasks and meet the benchmarks necessary to obtain five stars at your current locale. These tasks are essentially the same in each location, which is a little disappointing, but it doesn’t take much away from the fast-paced cooking fun.

The road to culinary greatness is littered with plenty of stomachs to fill and bizarre faces to feed. Your clientele changes slightly, depending on the kind of restaurant you’re running at any given time, but each has their own eccentricities and peculiar tastes. From the local farmer with gastrointestinal issues and a preference for “stanky” food to the crusty cowboy who likes all his food burnt to a crisp, the ever-revolving cast of weirdos never lets up. The impeccably silly voice work flowing liberally throughout the game can be a little over-stimulating at times, but it really makes the hilarious personalities of the customers, waiters, and kitchen staff members shine through.

Order-Up! rises above being just a culinary minigame collection and takes the next logical evolutionary step in the virtual cooking genre. The game has a natural flow that closely mirrors the kinetic energy of actual restaurant food prep – largely a good thing. It’s the most well-rounded foodie game to date.

Bottom Line: Addictive cooking action in a zany cartoon world makes one hell of a recipe for fun.

Recommendation: Buy it. You know you crave this pixel cuisine.