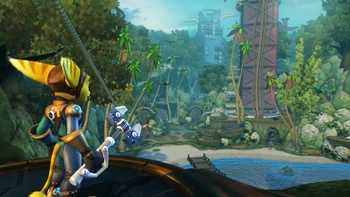 Ahoy there, matey! Won’t ye drop anchor awhile? For this scurvy-ridden old seadog be wantin’ to ply ye with grog whilst me spin a picaroon about … um … the latest downloadable iteration of Ratchet and Clank Future available exclusively on PlayStation 3. (Once you get past “aaarrr!” and “shiver me timbers!”, talking like a pirate is kind of impractical.)

So what do galaxy-hopping, platform-negotiating gun nuts Ratchet and Clank have to do with pirates, exactly? Well, though you wouldn’t necessarily have guessed from its marketing, the last proper R&CF instalment, Tools of Destruction, featured a lengthy nautical interlude that tipped its tricorne to the high-seas hijinks of Pirates of the Caribbean, not least with its improbably rousing faux-ho-ho soundtrack that both evoked and skewered the work of movie composer Hans Zimmer. Ratchet and his prissy aide-de-camp Clank clashed sabres with the diabolical space pirate Captain Slag … and predictably sent yon bilge-sucking buccaneer alls the ways down to Davy Jones’s that’s-quite-enough-pirate-talk-for-now.

You can’t keep a good corsair down, though, so Captain Slag returns to wreak havoc in Quest for Booty – a bite-size R&CF add-on that costs a mere 15 bucks from PSN – although there’s sadly still no sign of Clank, who was whisked away by placid-but-mysterious alien race the Zoni at the climax of the last game.

So despite the subtitle, this isn’t really an expedition for mere financial gain; our hero Ratchet is attempting to pick up the trail of his beloved metallic flunky. He’s accompanied by criminally underdeveloped love interest Talwyn – no Ratchet and Skank jokes, please – but since she’s almost always jetpacking off somewhere else, it feels more like a solo mission, with our furry hero hopping and blasting through four sumptuously-realised alien locales.

Developer Insomniac Games has intimated that Quest for Booty is meant as both a stopgap for long-standing fans before the next full instalment (pegged for Fall 2009) and an entry-level primer for gamers unfamiliar with the highly polished series. So where the franchise once fetishized a riotous arsenal of wanton weapons that sprawled over multiple inventory screens, here it mostly boils things back down to basic puzzling and platforming, with a renewed emphasis on Ratchet’s trusty Omniwrench. This techno-spanner has been upgraded, now functioning as a burger-flipping tool to snare and transport key items, notably glowing underground beasties that repel swarms of evil bats. It’s also capable of firing a Ghostbusters-esque energy beam that can recalibrate unhelpfully positioned platforms. While the shift from frenzied, full spectrum blasting to mechanical tinkering might not sit well with the mayhem-addicted hardcore, it makes for some satisfying leaping action (it helps that your manipulator beam crackles noisily like the old-school electricity that animated Frankenstein’s monster). 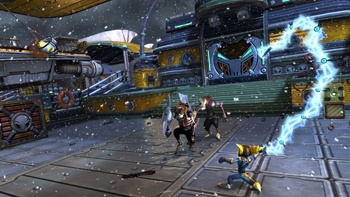 The rock-solid framerate and gorgeous, Jolly Rancher-sheened graphics make this the best-looking downloadable PS3 game to date, with routinely excellent voice-acting – the default narrator, cowardly brigand Rusty Pete, does a fine job of pitching the humor at just the right side of salty sailor talk, and even resists all those potential booty jokes. By now, Insomniac knows exactly how to squeeze the best out of its game engine, and there are quirky puzzle mechanics thrown in to break up the platforming (including shaking up surprisingly tony cocktails to get past a belligerent grog merchant, and a follow-the-leader musical sequence involving a gigantic pipe organ). The brilliant score has also been lovingly expanded, sounding even more stereotypically pirate-y than before.

In fact, it’s all put together and paced so smoothly that, for any halfway decent player, progress is pretty much continuous. It’s possible to complete the story arc in roughly the same time it would take you to watch the overstuffed Pirates of the Caribbean: At World’s End (okay, maybe longer if you attempt the hardest difficulty setting). And while the game is more consistently entertaining than any of the Pirates movies, once Quest For Booty is over, there’s not that much incentive to revisit what is essentially a linear yarn (with a slightly unsatisfying climax). Part of the fun of Tools of Destruction was replaying the game after you’d maxed out your flamethrowers, buzzblade launchers and disco grenades – here, even once you’ve restored some of your peacemakers to their former vandalistic glory, you can’t take them with you on a second go-round.

There’s also no sign of the standalone arena levels where Ratchet was charged with taking on waves of baddies within certain constraints – short bursts of intense run-and-gunishment that would seem like an obvious inclusion for a downloadable title. And a final moan: why no jetboots upgrade for Ratchet this time? I hadn’t realised just how much I’d gotten used to Superman-ing my way round the levels of Tools of Destruction until this nimble ability was withheld.

As a benchmark for the potential technical and artistic quality of downloadable games (albeit ones that piggyback existing franchises), Quest for Booty be a triumph, for sure. Its slickness might make it too easy to hurtle through in one sitting – but it’ll help kill some time until next year’s Talk Like A Pirate Day.

Bottom Line: An impressive-looking, streamlined R&CF experience that eases back on the killpower in favour of brainpower. But once it’s done, it’s done.

Recommendation: Aaarrr! (Worth a look.)

Graeme Virtue is a freelance writer based in Scotland. He wrote about his numbskull urge to finish mediocre PS2 action-adventure games in The Escapist Issue 151.