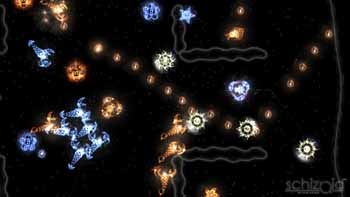 Schizoid, the first game built with Microsoft’s XNA Game Studio Express tools and the first project from Torpex Games, has been described as “the most co-op game ever,” but that doesn’t make it the most fun co-op game ever. Not that it has to be to warrant a purchase, but I have to admit I feel like the ten dollars I spent on it had more potential.

The concept is a healthy blend of Pac-Man and Ikaruga: There are two ships that can only mow down enemies of their own color, blue or orange. The idea is to protect each other and vanquish all the enemies that aren’t yellow (fatal to both). Once you advance a bit, there are some power-ups to share, like speed boosts or a razorwire to clothesline enemies that come between you and your partner.

All you need to play this game is an analog stick, two if you venture into the Uberschizoid mode for the hardcore and ambidextrous (which, incidentally, is the most satisfying single player variant – “Wingman Bot” from the Training mode has some crummy AI issues I’ll get to later.) The controls are very simple and accessible, but unfortunately, your ship feels painfully slow. Most of the time I really just felt like I wanted to shoot things instead of staging ridiculous chase scenes where you barely feel like you’re catching up. Oftentimes you’ll be required to move in on a conga line of different colored enemies to skim off a couple that are compatible with your destructive powers, before trading with your partner so he can clear out the next couple. You can eventually get used to the sluggishness of the ships, but if they were just a little perkier, these maneuvers would be more exciting and less like a series of accidental kamikaze missions.

Game modes include Local or Live co-op, Wingman Bot Training, and Uberschizoid. Wingman Bot Training is the single-player option for those who don’t aspire to uber ambidexterity in Uberschizoid, but it can be much more trouble than it’s worth since the AI is often no help and frequently wastes your lives. In one instance while I was playing, it got irrevocably stuck in a tightly jittering dance where even my peril at the hand of an orange Schiz couldn’t rouse a move in a new direction.

Of course, you don’t play Schizoid for the single player, you play it for the co-op, but that’s underwhelming, too. Not that teamwork isn’t fun, but your ships are still plagued by the same speed issues, so you find yourself looping closer and closer to the death in pursuit to try to give your partner an opening for attack.. Some of the levels have clever designs that take really good advantage of the teamwork, but more often than not we just relied on the brief moments of shielding that occur when either ship dies to muddle our way through. It didn’t take long for most of my friends to decide they had better things to do.

Part of the frustration lies in the flow of the game. The levels are split up into batches of seven that you have to finish before reaching a checkpoint. Ten lives per batch seems extravagant, but only for a moment, as you soon reach levels that inspire not an addicted zeal, but an angry desire to go in search of a more rewarding experience. Mitigating this somewhat is the medal system; if you can make it through a level without dying, you’ll earn a gold medal that exempts you from having to replay that level if you die later in on the batch. And you will.

Schizoid‘s nondescript guitar music and occasional graphical slow-down aren’t bad enough to ruin the game, but they do add another layer of average.

Bottom Line: When you realize your Microsoft points are gone forever and you get a sinking feeling, that’s probably not a good sign. Schizoid isn’t something I will find myself coming back to, despite my enthusiasm for co-op gaming.

Recommendation: Try it, if you’re at all interested. The free trial is pretty…free, so it’s a no-risk proposition.

Stolen Pixels #8: Just Between us Girls