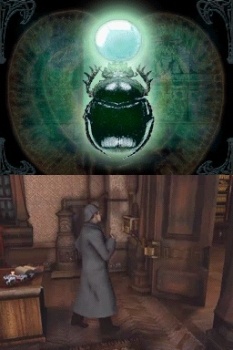 Whenever I spend quality time with my Nintendo DS, it’s usually got something to do with sleuthing. My crime-busting stylus patiently connects the dots between hazy clues and submerged motives, whether I’m slouching around a flea-bag hotel in a grubby raincoat, yelling “objection!” during a lurid courtroom soap opera or unraveling the clockwork secret of a picturesque but curious village. Something about the methodical pursuit of justice seems particularly well-suited to Nintendo’s wee handheld. (Its latest incarnation, the DSi, even sounds like a forensic cop show).

Coming a little late to the DS prosecuting party is the Master Detective himself, Sherlock Holmes, lugging all his iconic baggage – magnifying glass, deerstalker, Meerschaum pipe, manageable cocaine habit – along for the ride. With apologies to Mr. Spock, Holmes is literature’s greatest logician, regularly astounding his faithful companion Doctor Watson by determining a stranger’s occupation within seconds, merely by observing their comportment, the condition of their coat-sleeves, the callosities of their forefinger and thumb and other such “trifles.”

So what to make of Sherlock Holmes: The Mystery Of The Mummy? At first glance, one can deduce a fair bit: that it’s a port of a creaky PC point-and-click adventure game that was pretty basic even when it was first released in 2002; that despite such a passage of time, its transfer to the DS has been undertaken at high speed; that the game was originally created by a team who spoke English as a second language, but had nonetheless been exposed to Scooby-Doo; and that the publisher expressed concern that the opening scenes were too challenging for novice players. How do I know all that? To paraphrase the master, a conjurer gets no credit once he has explained his trick; if I show you too much of my method of working, you will come to the conclusion that I am, after all, a very ordinary individual. (In other words: Google. And slogging through the game for about 20 minutes.)

The case before Mystery of the Mummy‘s Holmes is concerned with inheritance: A famed Egyptologist has been murdered in his handsome country house, and suspicion hovers over those relatives most likely to benefit, though there are also wild rumors of a revivified mummy enacting an ancient curse. (The plot isn’t based on any of Arthur Conan Doyle’s original stories.) Some intriguing assets have been passed down from the PC version: cinematic cut scenes of an acceptable quality, a country house modeled in some detail and some above average voice acting, if not scriptwriting.

With players navigating on the touchscreen from a first-person perspective, Holmes abruptly hopscotches between a series of predetermined points in each area. Thus perched, presumably stork-like, on one leg, Holmes can then spin around 360 degrees to look for clues. This is where the detailed modeling can hamper the investigation – the elaborate textures routinely obscure the location of vital items, and progress requires a methodical search of every room. A tedious but necessary chore, Watson! 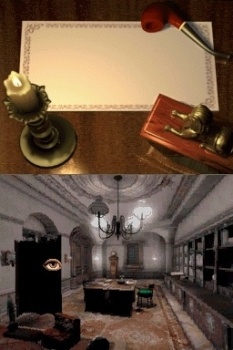 The top DS screen handles the housekeeping, with a shoulder button press toggling it to the touchscreen. There’s a file to review retrieved documents, a notepad to doodle on, an inventory of obtained objects and an exhaustive hints system that will hold your hand for every step of the sequential puzzles. (The printed manual also cautiously walks you through the initial 10 minutes, presumably because overcoming the first few obstacles is alarmingly unintuitive).

Split into five levels that each restrict you to certain parts of the manor, Mystery of the Mummy doesn’t burden you with red-herring objects – everything you pick up has a predetermined purpose and disappears after use. So when faced with the conundrum of trying to pry open the mouth of a stuffed lion, the temptation is just to try combining it with every last doohickey in your inventory. (Which could be an invocation of Holmes’ oft-repeated maxim: “Eliminate all other factors, and the one which remains must be the truth.”)

After a clunky start and the rapid realization that the game is ruthlessly linear, you start to find a ragged groove. Aspects that were initially irritating wear you down – notably, the disconnect between the subtitles and voice acting, which is so pervasive it becomes campily amusing. And the final problem, involving the construction of an ambitious Rube Goldberg device to neutralize a powerful bomb, made me chuckle even as I was scratching my head. But then it’s over, and Holmes is suddenly recounting his analysis of the case to Watson in a way that seems plausible – although his elegant deductive reasoning bears absolutely no relation to any of the “combine matches with lamp” legwork you’ve patiently poured into the experience.

This Sherlock Holmes adventure series has apparently flourished on the PC, with subsequent installments seeing Holmes cross wits with French gentleman thief Arsene Lupin, slash-happy boogeyman Jack the Ripper and even HP Lovecraft’s doomy Cthulhu mythos. But this is an unforgivably fumbling start for the franchise on what should be a lucrative new platform. And even after you’ve unbandaged the mystery of the mummy, one persistent riddle remains: How can you create a Holmes videogame without ensuring your protagonist exclaims “The game’s afoot!” at least once? There must be some rational explanation …

Bottom Line: If you can adapt to the clunky mechanics and resist the impulse to proceed in lockstep with the embedded walkthrough, there are a few engaging hours here. But it’s more sham than Meerschaum.

Kojima Confirms Work on a New Game in a New Franchise