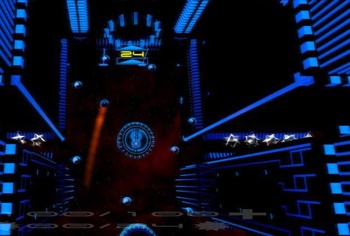 If Strange Attractors 2 is to be taken literally, there is a small, magnetic ball floating in space. Where did it come from? Where is it going? And more importantly, why is it exploring a metallic construct inhabited by an alien race that looks like a cross between a Teletubby and The Incredible Shrinking Man?Hell if I know, the game is virtually void of any backstory or plot. However, after playing this gem for about four hours total, I can attest to the fact that you won’t care whether the story involved Professor Antisocial inventing an artificial, metallic nut to explore the universe of women or if it’s somehow tied in with Charlie and the Chocolate factory. SA2 is a gift that keeps on giving to the player, and all it wants in return is that you don’t ask questions and stick around for the ride.

If you took SA2 and put it next to an actual pinball machine, you’d almost assuredly point to SA2 and say: “That’s a better pinball machine.” At the core of Strange Attractors 2 is everything good about our beloved quarter-gobbling hobby minus the terrible. It retains the twitch factor and difficulty while popping in creative puzzles (not to mention little space men), and demotes the high score objective into a side show.

You guide a magnetic ball around the room using the left and right mouse buttons to manipulate gravity with the objects that are available. These objects have varying degrees of attraction i.e., you’ll be more likely to move toward the larger magnet than the smaller one) and you use the left mouse button to gravitate towards those objects. Conversely, you use the right mouse button to repel away. There is an interesting mechanic whereas if you repel away from an object on impact, you’re sent soaring the other way. This is both a crucial and annoying tactic because sometimes you’ll simply rocket past whatever target you were aiming for.

Levels take place on the individual “worlds” of the construct. Each world has around three zones, each with different rooms and puzzles. Every time you want to continue to the next room of a zone, you must collect a certain number of stars. This could be as simple as ricocheting blindly across the main room alone, or as complex as going into multiple other rooms and acquiring special powers to go into yet more rooms where the vast majority of the stars are kept. Then you move on to the next main room and so on.

One thing I found perplexing was the fact that it’s nearly impossible to die; if you’re frustrated with a certain part and want to murder your avatar, you must impale yourself repeatedly on spikes or wait for a tiny alien to blast you to death. The latter can take much longer as each shot only knocks off one health point, and you start with have one hundred. This is unfortunate, really, as some parts are so frustrating you may think it’d be more enjoyable to stick your tongue in a blender than keep playing. For instance, in one zone, it took me 10 minutes just to exit one of the main rooms after I had collected all of the stars and the portal had opened. I simply could not guide the ball well enough to get it through the gaping hole in the wall. Either it would bounce off other wandering objects unintentionally or I would just aim completely off target. I know that almost every mistake made was my fault, as the physics engine is nearly impeccable, but that made it no less frustrating.

Bottom Line All in all, you have a very competent arcade romp. that’s pinball and Mario combined. It has the old school charm of Pong while being very challenging.