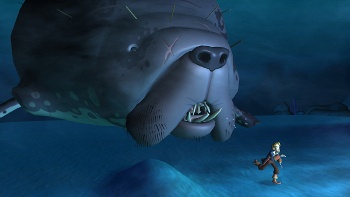 We’re halfway into the Tales of Monkey Island series and you’d think it would be well into its stride now. Sadly, Lair of the Leviathan is a misstep in the series and suggests that Telltale might have peaked a little too soon. That’s not to say that that Lair of the Leviathan is a bad game, but it is a resounding “meh,” never quite making it beyond the level of “adequate.”

The long-lost explorer Coronado De Cava and his crew of misfits have been stranded within the manatee’s various passages for years and while De Cava is eager to continue the hunt for series macguffin “La Esponja Grande,” his crew are quite happy where they are. Once Guybrush recovers the manatee’s missing cochlea – no, I’m not joking, you have to find a manatee’s inner ear – and restores its sense of direction, the adventure leaves the sea cow and heads to the ocean floor where La Esponja Grande is guarded by the titular Leviathan.

Now, the secret of adventure games is that they’re something of a balancing act. If a puzzle is a bit ropey, you prop it up with a couple of decent jokes and if the writing is a little flat, you pair it up with a fun puzzle so that no one will notice. The problem with Lair of the Leviathan is that neither the writing nor the gameplay are strong enough to make up for the deficiencies of the other and so the whole thing comes off as flat.

Telltale’s writers seem to be laboring under the impression that as long as they’re wacky, they don’t have to write anything particularly funny. While it’s true that the Monkey Island games have always had a foundation of anachronistic craziness, it was always alongside quality writing, never in place of it. There are definitely occasional chuckles to be had in Lair of the Leviathan, but all in all, it’s pretty forgettable stuff.

Equally forgettable are the episode’s cast, a collection of stereotypes that little effort has been made to flesh out. The fratboy that takes every opportunity to get wasted and calls everyone “bra” and the awkward nerd with the hots for the girl way out of his league aren’t compelling characters, they’re comedic shorthand. Even Morgan, the best realized character in the whole episode, is just Scrappy Doo with a nice rack. It wouldn’t be so bad if these were minor characters, but when they’re the main cast of an entire episode, you start to worry for the future of the series. The fact that this episode sees the return of Murray – a one trick pony if ever there was one – speaks volumes. The only time that the writing ever really has any spark is when Morgan is pining after an oblivious Guybrush, but even that has just as much to do with the voice actors as the writers and it could have been lifted from just about any Hollywood movie you care to mention.

There’s no relief to be found in the puzzles either, which are too easy in places and just frustrating in others. The episode’s environments are very small, only a handful of screens each, and so while the annoying scavenger hunt aspect of previous episodes is significantly diminished, once you’ve stripped the level of anything not bolted down, the puzzles are almost trivial to solve. That wouldn’t really be a problem if the game was especially funny, but it really isn’t, so the process just becomes tedious. The puzzles improve towards the end – the way that Guybrush learns to speak manatee is inspired – but by that point you’ve had to put up with three hours of pretty mediocre stuff.

When Lair of the Leviathan is at its worst however, is when Telltale is trying something other than simple puzzles. The section at the beginning where Guybrush is interrogated about Morgan, who is posing as his wife, and must base his answers on various clues he picked up only moments earlier is a great idea, albeit not very original, but its “make a mistake, start the whole thing again” execution is not. Nor are the “Pirate Face” contests at around the two hour mark, which has all the drudgery of insult sword-fighting – you have to collect the various faces from people and things – but without any of the wit that made it a fan favorite in the first place. This is doubly galling when you consider that Telltale said that it was leaving insult sword-fighting out of Tales of Monkey Island because it was “done to death.”

The Bottom Line: As negative as some my comments might have been, Lair of the Leviathan isn’t actually bad, it’s just disappointing. Whether because of deadlines or some other reason, Telltale clearly hasn’t spent the time on this that it needed.

Recommendation: This is the tricky part because if you’ve played the previous two episodes, then you’ve already paid for this, as Telltale did not sell the episodes separately. If, on the other hand, you were waiting to see how the series progressed before you put your hand in your pocket, you might want to wait a little longer in case this turns out to be a trend.

Logan Westbrook didn’t make a single pirate joke while writing this review, you should thank him with cash.