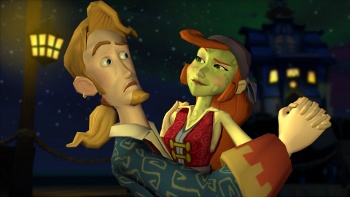 Normally, when you’re more than three quarters of the way through a game, you’re able to decide whether it’s good or bad, but we’re four episodes into Telltale Game’s Tales of Monkey Island series and it’s still not clear whether the game – as the five episodes tell a single story – is worth your time and money. After a strong start with the first two episodes, the series seemed to stumble with Lair of the Leviathan, which was average at best, and sadly The Trial and Execution of Guybrush Threepwood is equally unimpressive, meaning that the final verdict on the series is going to go right down to the wire.

The whole things sounds pretty good on paper: Betrayed by Morgan at the end of the previous chapter, Guybrush begins his journey by returning to Flotsam Island to stand trial for, among other minor crimes, his part in the creation and spread of the virulent voodoo pox infecting the pirates of the island.

Unfortunately, it’s difficult not to feel a constant sense of déjà vu with The Trial and Execution of Guybrush Threepwood. Flotsam Island is largely unchanged from its appearance in Launch of the Screaming Narwhal, and pretty much the same cast of characters populates it. It feels like Telltale has run out of ideas, although the episode structure exacerbates that somewhat.

The island isn’t completely identical of course; Guybrush can now enter the Flotsam Courthouse and Club 41, and Davy Nipperkin is nowhere to be found. In his place is Stan, used ship/coffin/insurance/condo salesman turned prosecuting attorney, and his legal office. This is the same Stan who has turned up in every single Monkey Island game to date and his inclusion is particularly unwelcome, as Telltale has clearly shoehorned him in for the sake of fan service and not because he’s actually important to the plot. To be fair to Telltale, it does a decent job of working him into the puzzles, but I’d have much preferred a new character than one thrown in as a bone to old fans of the series.

Even if you can ignore the recycling of locations and characters, you’re not really in for a compelling time. The puzzles in The Trial and Execution of Guybrush Threepwood are actually pretty decent, but thanks to the way the episode is constructed, certain lines of dialogue get repeated over and over, making the process of actually clearing the puzzles rather tedious. For example, you can’t go directly from the courtroom to the dock, you first have to go to brig, talk to the guard and have him let you out to the dock. Even if you manage to figure out the puzzles on your first try and somehow divine the most efficient way of solving them, you’ll still have to repeat the process two or three times and listen to the same exchange over and over. After the fourth or fifth time of hearing Guybrush say “not getting any smarter,” I started to wonder if it was me or the guard he was talking about.

What’s worse than the puzzles, however, is the writing. The dialogue for most of the episode, when it isn’t stuck on a seemingly endless loop, is fine, but the plot plays out like a bad soap opera, packed with “shocking” revelations, awkward tonal shifts, and plot twists that seem cheap and arbitrary. Given that The Trial and Execution of Guybrush Threepwood is the penultimate episode in the series, you’d expect it to be tying up the loose ends. Instead, it throws up a whole load of new loose ends, all of which are going to have to be resolved in the final episode.

The Bottom Line: While The Trial and Execution of Guybrush Threepwood never crosses the line into “bad,” it never rises above the level of “ok” either, and if you’re a fan of the series, you’ll find a lot not to like.

Recommendation: If you haven’t already shelled out for these, wait until the last episode comes out, because it’s the tie-breaker between decent and adequate. If, like me, you paid for the whole series up front, cross your fingers that Rise of the Pirate God will redeem it.

On Remakes and Nostalgia

There Will Be Brawl: The Story So Far