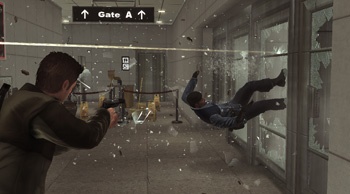 No, that isn’t Matt Damon and The Bourne Conspiracy is not a movie tie-in game – High Moon Studios used the original Robert Ludlum novels as its primary source material. Does that lend it extra cred when I say that while it may not end up your favorite third-person shooter/brawler hybrid, there is definitely some fun to be had as you help amnesiac-assassin Jason Bourne track down…himself?

The pared-down yet simultaneously expanded upon (with new, Ludlum-estate approved prequel material) plot jumps back and forth between flashback missions during the “30 million dollar weapon’s” heyday and his present existence on the lam with a pretty lady. You definitely get a sense of the story via the fancy cut scenes (even if the kisses are a bit uncanny valley), but it’s clear that gameplay is the focus, which is probably why I kept banging my head repeatedly while replaying the same segments over and over until I had them down to the science that even “Agent” (medium difficulty) seems to require.

The action consists of fist fighting, shooting, and quick-time events blended to the consistency of a tasty chocolate malt. I’m not saying it’s perfect – maybe there’s a hair in the glass? – but it’s enough to feel like you’re not wasting your time.

The fighting system is easily the most entertaining part of the game. Environmental Take Down moves, such as breaking a copy machine with an enemy’s face or throwing a boss into a huge flashing neon billboard are the perfect motivation to keep socking away during those hand-to-hand fights. Plus, throwing the same handful of quick/heavy combos over and over doesn’t get as boring as you might think, a fact I attribute to not only the cinematic camera that swings around, framing everything dramatically in real time with no player assistance required, but also just the pleasantness of the graphics. When an assassin kicked in the window at my hotel, the first thing I did after making sure I was mixing up the combos sufficiently was admire his sweater. All the character models look great, although puzzlingly, I felt a bit of a design inconsistency with Bourne himself (and I don’t mean his variety of outfits) from time-to-time between cut-scenes.

The way the game deals with Bourne vs. two or three guys is by having your adrenaline bar, which fills up as you bloody your knuckles, hold up to three Take Down moves at once. While you’re at work smacking whichever guy is suicidal enough to be facing you at the time, one of the sideliners will occasionally try to cut in, forcing a quick-time event. A similar moment occurs when a boss tries to pull a Take Down on you – prepare for aggressive defense. It makes the fights seem more realistic, but in a very contrived way. Gameplay-wise, knowing there could be an important button press at any moment gives you an incentive to actually learn what the combos do and not button mash (which is really a must anyways, since fights start having irksome time limits attached), but then unfortunately you’ll still get caught pressing the wrong button simply because you were going for a totally appropriate combo at a time the game suddenly determined to be inconvenient. Despite this overthinking, fistfights are still a fun way to dispatch foes. 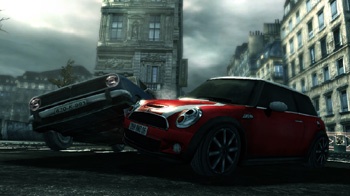 Headshots are also satisfying, but the shooting system has some superficial flaws that probably shouldn’t have escaped QA. At first I was worried my controller was breaking, but the problems were quite consistent. None of it is game-breaking, luckily – that would’ve been tragic – but they are still annoyances in an otherwise solid system. Pausing and unpausing causes your gun to fire, which is especially awful in the case of a semi-automatic, since it’ll squeeze off about ten bullets. Crouching voids this, somehow. Then, if you die and have to restart, each of the triggers (L for popping out of cover and R for actually shooting) needs a warm-up pull for some reason. That’s easy enough to do if you’re aware of it, but I’m still not sure why it’s there.

I get the impression High Moon focused more on AI than the way enemies react when being shot – sometimes they don’t even flinch, but other times they sort of trip and scramble for cover – which seems like an effective strategy. After all, a guy’s decision to rush you or hide behind a fountain affects your game more than whether he notices how full of bullets he is.

It’s past cliché now to say that action games always seem to have a driving level, but Bourne‘s seems to have been given a lot of attention. It really is just one level zooming around Paris in a Mini Cooper, but the steering is tight and it’s great fun to go crashing through alleys and courtyards on the run from the police while your girlfriend gets more and more alarmed. There did seem to be another controller hiccup at the beginning of segments where you had to accelerate from a standstill, but once again it was thankfully easy to overcome.

Bottom Line: Whether you’re sneaking along the docks of Marseilles, infiltrating a museum, or securing a country house, this game looks and plays well, for the most part. Its biggest weakness might be its constant use of quick-time events, which many players find bothersome.

Recommendation: Try it. Bourne delivers enough fun to make it worth owning, but it’s short enough to beat on a weekend rental. Besides, not everyone is willing to deal with quick-time events.

Emily Balistrieri is a freelance writer who likes puppies and curry (though not at the same time), and studies kanji while waiting for the bus.

Stolen Pixels #2: Capturing the Something