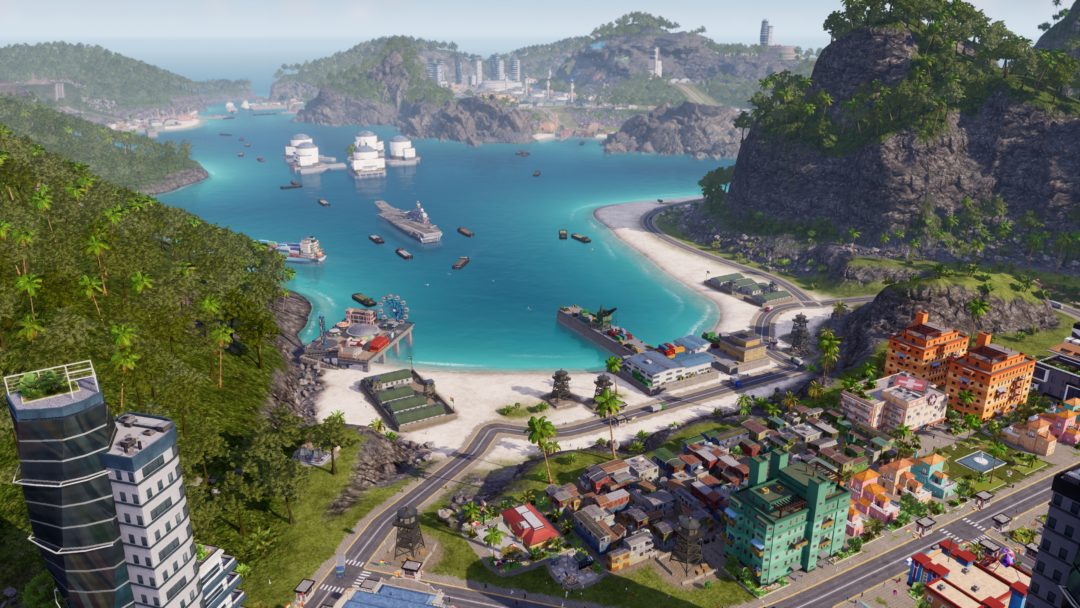 Load screens are pleasantly rare in Tropico 6, and the few times they do appear they offer one of two types of text: game tips like “make sure to employ enough teamsters” or facts about the ridiculous propaganda efforts pulled off by real world dictators like North Koreans being taught that Kim Jong-un has never defecated. That dichotomy neatly sums up Tropico 6’s identity. It’s a deeply fiddly civilization simulation and also a dark comedy about the ways strongmen control their populace to stay in power across the ages.

Like the rest of the nearly 20-year-old series, Tropico 6 has players take on the role of El Presidente, the leader of a small Caribbean nation. You can customize your ruler’s gender and appearance and even give them little merits and flaws like “Charismatic,” which improves your relationships with all internal factions and international superpowers. Alternately “Corrupt,” riddles the area around your palace with crime but gets you extra payoffs from bribes sent to your Swiss bank account. While El Presidente can pay visits to buildings to improve their efficiency and will periodically give election speeches, most of the time players are taking a God’s eye view of their nation to better monitor the economy, construction projects, citizen happiness, and myriad other factors needed to keep things running smoothly.

There’s a multi-hour tutorial campaign meant to let series newcomers learn the ropes and introduce new elements in Tropico 6, most notably that you now rule over a small group of islands with their own resources rather than just one main island. Even after playing through it I still found myself having to figure things out on the fly. For instance, the tutorial teaches you how to connect islands through bridges, but that technology isn’t available until after the Colonial Era. When I started actually playing as Governor, overseen by a contemptuous representative of “The Crown” who kept threatening to send me back to the plantations if I didn’t do a good job, I wasted a lot of time figuring out how to using seaside landings to provide a similar effect.

It’s a weird feeling to be both frustrated and impressed by just how deep this game goes.

In a different one of the game’s 15 story missions, I was trying to get a chocolate factory up and running but couldn’t figure out why I wasn’t getting enough sugar from my plantation when it’s neighboring cocoa farm was doing just fine. I didn’t realize that different areas of the map are better suited for different types of crops. That certainly adds to the realism of the game, but forced me to completely rethink my approach to farm placement. I had to make sure I selected the resource I wanted before paying close attention to the efficiency each area would provide prior to actually beginning construction.

It’s a weird feeling to be both frustrated and impressed by just how deep this game goes. I had to just settle into the knowledge that I was going to make a lot of mistakes before I could really run things smoothly. But I was still frustrated by how some things remained opaque. Citizens prefer being homeless to living too far from their jobs, but living in shacks will still lead to housing unhappiness which they’ll take out on El Presidente when an election rolls around. Unfortunately there’s no clear indication of what the commute radius is, so plenty of times I’d build a nice new apartment building and still find my land marred by shacks. I wound up having to literally evict people by constructing new residences right on top of their makeshift homes, which like so much of the game perfectly evokes the reality that pragmatic governance is disturbing.

Thankfully the humor softens that bitter reality. El Presidente is assisted by Penultimo, a loyal toady constantly praising his leader’s every decision while casting aspersions on any foolish citizen or world leader that would doubt them. But this praise also comes with suggestions for how to make sure those factions don’t upset you too much, an entertaining way to provide tips and tasks within the course of a game. Meanwhile you’re constantly peppered by requests from self-righteous clergy members, military leaders panicked by some poorly explained threat, and seedy capitalists. The Cold War period is especially fun when representatives of both the Eastern Bloc and Western Powers reach out to you with requests filled with spy tropes. There’s also really bleak stuff like the potential to offer your island as a nuclear testing site in exchange for a huge infusion of cash. The deeply shady broker negotiating the deal tells you that as an added advantage your people will “save money on haircuts.”

It’s honestly a shame that there aren’t more dialogue options. The same requests and gags tend to pop up over and over again during the course of an era, transitioning from genuinely amusing diversions to just another way to tell you to build a library or a golf course. That humor helps break up the stress that bubbles up. First your economy dives into the red and you’re trying to figure out how you can keep tourists from getting bored. Then you’re also making sure your citizens don’t scare them away by lighting things on fire because they’re angry that you’re exporting all the seafood and the new opera house is too expensive for them to enjoy. If you try to appease everyone by ramping up rum production, you’ll drain the land’s fertility too quickly or generate so much pollution that it pisses off the environmentalists and you’ll have to add a zero emissions policy to the constitution to appease them. Or can you get away with just building a botanic garden? Should you just have the leaders of the opposing faction imprisoned in an asylum and hire more guards at the palace to deal with the fallout?

There’s no clear right answer and that’s what makes Tropico 6 so much fun. Governance has always been an experiment, and it’s one that’s continuing around the world today as people and their leaders question what they’re capable of, what they’re entitled to, and what the balance between democracy and authoritarianism will be in the modern age. That’s heavy stuff to consider while listening to Tropico 6’s cheery Latin soundtrack and zooming out to appreciate it’s bright detailed landscapes filled with hidden ancient wonders and resources just waiting to be exploited. Luckily when you mess things up in this world, you can just load a saved game and try again.

This game was reviewed on PC using a code provided by the publisher.