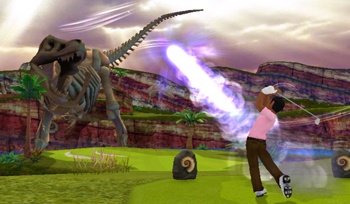 In its title, We Love Golf suggests an abundance of emotion is contained on its disc. We don’t just tolerate golf. We more than like it, even. We [/b]love[/b] it. We have the same feelings for golf as we do for our families and friends, says the title.

Well, the actual game says otherwise. Decent gameplay is marred by lackluster presentation and hindered by a deficiency of flair or personality. We Love Golf is missing the imaginative and artistic passion that could have made it the must-have golf title for the Wii. It’s also way too easy.

Step one for enjoying We Love Golf is lowering your expectations. Step two is turning off the background music. Immediately. Unless you answer yes to the questions “Is elevator music awesome?” and “Is it better when it’s loud and you’re trying to concentrate on golfing?” you won’t like the music. Trust me. Unfortunately, the game doesn’t consider the music that plays during hole previews and character animations as belonging to the “background” category so you’ll still have to put up with occasional blasts of bad muzak.

You’ll also have to put up with some terrible graphics. Trees, bushes and flowers look like props from an elementary school play. Background sky textures are so pixilated a Super Nintendo would be embarrassed to be seen in public with them. Every time the camera zooms in to show where your ball lies, the grass texture’s resolution is so low a Nintendo 64 will actually walk in to your room to make fun of it.

The game’s courses are mostly not interesting. The first few are largely indistinguishable and playing them is straightforward. Later in the game, designs become more fantastical. Courses based on Egyptian deserts and Arthurian castles boast multi-path holes with shortcuts and challengingly sloped fairways. Tornadoes, pirate ships and desert rock formations add to the scenery. Nothing is ever spectacular, though, just perfectly balanced on the fulcrum between crappy and good.

Submerged in the aesthetic swamp of We Love Golf, though, is a decent way to whack some virtual balls. The motion-controlled swinging feels good. Games don’t drag – you can breeze through 18 holes of solo play in about 30 to 40 minutes – and the game simulates golf’s intricacies with different lies, wind speeds and grips affecting how your balls fly. None of these features are original in a golfing videogame, but at least they’re here. We Love Golf includes some mini-games as well, like hitting your ball through targets or landing a shot as close to the pin as possible. They’re fun, but at about a four out of ten level (where twiddling your thumbs is a one and having a magical wallet that never runs out of money is a ten).

Controls are basically a Wii version of the “time your button presses to a moving power gauge” scheme used in other games by developer Camelot Software Planning, who also made the original Hot Shots Golf for the PlayStation and the Mario Golf series for various Nintendo systems. In We Love Golf, you stop your backswing when your gauge powers up and then swing at the right moment to hit a straight shot. Twisting your Wii Remote affects the draw and fade of your swing. How hard you swing has no effect, unlike golfing in Wii Sports, except during power shots, which send the ball further but require better timing. It’s all competently designed, but lacks anything to make the word “Wow!” come out of your mouth. 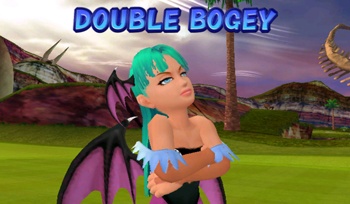 Poor AI makes the game far too easy when you’re playing alone. AI opponents always go too hard for the pin with their approach shots, inevitably skipping their balls past the hole 20 or more feet. Also, the computer-controlled characters had a suspiciously consistent way of making their putts come up exactly 0.36 feet short when I played. The feeling that the computer was letting me win wasn’t helped by the bad putting animation that makes a ball suddenly come to a full stop rather than slowing down first. Quirks like this manifest elsewhere, too. Chip shots bounce uncontrollably on greens that look flat. Special “fast fairway” segments of grass speed up the ball improbably, even making it accelerate uphill.

We Love Golf‘s roster of playable characters is instantly forgettable. You choose between boring clichés like Bouncy Blonde Bimbo and Nondescript Average Guy. Or there are the standard, borderline-offensive ethnic stereotypes like Tough-Talking Italian Dude (shockingly named Tony!), Flamboyant Spaniard and Repressed-Emotions Japanese Girl. My favorite was the Smell-His-Own-Fingers Kid, a young boy who inexplicably takes a whiff of his digits after every birdie. Other than his weirdness, the success or defeat animations that play after every hole are mostly grating, and sadly you can’t turn them off. Each character has only one animation per hole result, meaning that as well as being tedious, they’re often illogical, too. I got a bogey on the eighteenth hole with Long-Sideburns, Philosophy-Major Guy after which he made a pouty face and said, “This is not my day.” Well, turns out that he had actually just won the tournament with a -10 score, so I guess it was his day after all.

We Love Golf‘s box also promises you the ability to play as some of publisher Capcom’s great characters from titles like Street Fighter and Resident Evil. Well, it’s kind of true, but also kind of a lie. Completing various game modes only unlocks new costumes for the existing characters. So you don’t get to play as Arthur from Ghosts n’ Goblins, you just get to put an Arthur costume on the Flamboyant Spaniard. The famous Capcom characters don’t have their own unique animations or voices. Including them as legitimate playable characters would have softened the blow of We Love Golf‘s mediocrity; including them only as avatar skins comes off as cheap and misleading. You can also play as your Mii, although for single-player mode you have to unlock the ability, which seems unnecessary.

Bottom Line: We Love Golf is for kids. It’s too easy and too average for discerning gamers. It may be fun as a party game with a mixed crowd, but so is the golf game in Wii Sports, which comes with the Wii for free.

Recommendation: Wait for We Love Golf to drop down in price to about $19.99 or less in used game stores. You won’t have to wait long.

Chris LaVigne is a freelance writer whose magical wallet never runs out of lint or terrible driver’s licence photos.