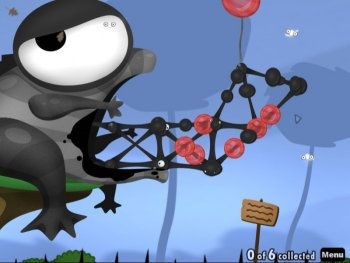 World of Goo, from the two-man studio 2D Boy, understands that the only thing more fun than building a tower is watching it tumble to the ground. In the same vein as Lemmings or Armadillo Run, Goo tasks players with building a variety of gravity-defying towers, bridges and other devices to transport their precious cargo of tiny anthropomorphic goo balls. Rather than marching headlong into the abyss like Psygnosis’ stubborn rodents, goo balls glide aimlessly along the branching limbs of the nearest goo construct, waiting to become the next link in the chain. A vacuum-like tube at the end of the level sucks up any goo balls leftover from the construction process; fail to meet the goo quota and you have to try again. It’s a simple gameplay mechanic that the development team has polished to a mirror shine and applied across dozens of wildly divergent levels.

The centerpiece of Goo is the World of Goo Corporation, a nebulous industrial conglomerate that, depending on your reading, is either manufacturing goo balls, enslaving them or merely delivering them to hungry consumers. Partly an expression of designer Kyle Gabler and programmer Ron Carmel’s deep ambivalence toward the game industry, it’s also an ingenious in-game achievement system: Each time a player rescues another goo ball in one of Goo‘s 47 levels, it’s conveyed to the World of Goo Corporation’s headquarters, where players across the globe vie for the glory of building the tallest Tower of Goo. Beat every level and you’ll have hundreds of goo balls at your disposal. As your goo balls reach higher and higher into the sky, tiny clouds appear that represent the heights achieved by other World of Goo players. It’s possible to spend hours alternately erecting and demolishing your tower, and adding an extra meter or two provides plenty of incentive to go back to the game’s story mode to rescue more goo balls.

This feature would be a moot point if the simple act of linking goo balls together wasn’t so incredibly satisfying. On the macro level, World of Goo‘s physics are both easy to grasp and surprisingly deep. It takes a bit to learn how to reinforce your structures in order to ferry your goo balls from one end of the level to the other, but once you discover how each of the eight species of goo behaves – some float, others are highly flammable and yet others shoot out tiny spikes to attach themselves to nearby objects – it’s as intuitive as building with marshmallows and toothpicks.

At a more fundamental level, however, World of Goo‘s stellar sound design and animations provide a uniquely tactile experience. Drag the cursor over a goo ball, and its eyes widen in anticipation; set it into place and it offers a gleeful shriek followed by a palpable plop. Bump too wildly against obstacles while carrying your goo ball across a level, and it will go flying into the air. This physicality practically begs for the tablet-PC treatment (or an iPhone port if you’re so inclined), but the Wii remote is a decent approximation.

Gameplay this engrossing would be enough to carry a lesser game, but Gabler and Carmel had something far more ambitious in mind. Across World of Goo‘s five chapters, they lay out a story that provides just enough intrigue about the mysterious creatures to stoke the player’s curiosity without making anything too overt. There’s a brief detour into goo-cyberspace that feels a bit jarring, but also provides some of the game’s most bizarre and inventive levels wherein you chat with a sentient search engine and bombard the Corporation’s headquarters with spam emails.

By focusing foremost on solid game design over more superficial concerns, World of Goo perfectly exemplifies a lesson even the best AAA developers occasionally lose sight of: In order to really reach for greatness, you have to start with a solid foundation.

Bottom line: World of Goo is the most charming, creative and generally weird indie title to come out this year, Braid included.

Recommendation: If you’re an obsessive completist, pick it up for the PC for mouse support. Otherwise, grab it on WiiWare. Either way, it’s a must-own.

Jordan Deam’s tower of goo is 27.1 meters and climbing.