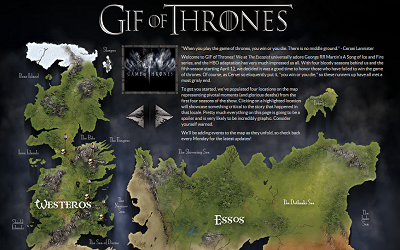 Game of Thrones season five is almost here and The Escapist has created a handy new guide to help you keep the show’s murders straight.

Way back in the show’s first season, Cersei Lannister pretty muched summed up the entire Westerosian experience in a single, simple sentence. “In the game of thrones you win or you die.” As easily as that encapsulates Game of Thrones however, it doesn’t do proper justice to just how complex the show and its source material get. Even if you’re not stepping into season five as a fresh-faced newcomer, it can be easy to get a bit turned around about who’s who, who’s fighting whom and who’s murdered whom. Luckily for all Game of Thrones fans, The Escapist has your back. And we don’t even have a knife to stick in it.

In preparation for next week’s season five Game of Thrones premiere, we’ve been working hard on a new interactive map aimed at giving you a resource to reference should you find yourself forgetting who the noble houses are and where everything is in Westeros. As a courtesy to you, we’re also including some nifty visual aids to help showcase the show’s most glorious (and awful) deaths and where they took place. This, of course, means that the map will be both spoiler heavy and filled with graphic content, so please keep that in mind before you look at it. As season five progresses, we’ll be updating the map on an episode-by-episode basis with our favorite deaths and other information that crops up and feels pertinent.

Game of Thrones season five will debut this coming Sunday, April 12th. Viewers interested in catching the premiere can tune into HBO at 9PM or catch it on HBO Go afterward. For further refreshers about the previous seasons feel free to check out The Escapist‘s comprehensive reviews of season four, as well as our Abridged video summaries.