The most remotely interesting thing about The Secret Life of Walter Mitty, the new Ben Stiller comedy based (very, very, very loosely) on James Thurber’s famous short story, is that it features an extended gag built entirely around Benjamin Button. Remember that? The movie where Brad Pitt was aging backwards? Well, Mitty is hoping you do, because that’s all there is to the joke: “Heh. I remember that. That was weird.” It’s a not particularly funny joke in a bizarrely anti-humorous “comedy,” but the strange specificity of it (and the question of who the hell thought “Remember Benjamin Button?” would be an automatic laugh riot) at least woke me up for a minute.

Thurber’s original 1939 story might be the ur-text of the 20th Century “Lovable Loser” trope. The setup: A bored man is pulled along on a dull outing by his wife and escapes from the tedium of the day by slipping into daydreams of heroic fantasy (a master surgeon, a brilliant prosecutor, a fighter pilot, etc) jumping-off from mundane events in reality. It’s not so much a plot as it is an observance of character, and you can probably draw a straight line from Mitty and his daydreams to the archetypal sadsack “sitcom guys” (think Ralph Kramden and his get-rich-quick schemes) all the way up through Family Guy‘s Peter Griffin and his context-bucking cutaway gags.

It’s no accident that I mention Family Guy, either – the film’s concept of “daydreams” has much more in common with those aforementioned cutaways than it does anything in Thurber’s story. In the film, Stiller’s Walter Mitty is a schlub whose boring existence is a job managing the negative (as in photographs) department at Life Magazine – which, this being a decade into the era of digital photos, means he’s mostly the middle man for Sean Penn as a globetrotting adventurer/photojournalist who’s so cool that of course he still shoots on film. The magazine is in the process of being taken over by a corporate interest whose agent (Adam Scott) plans to strip-down and streamline Life into a website, meaning that the next issue published will be (literally) The End of Life as We Know It. Subtlety is not this movie’s strong suit.

Penn has sent a roll of film which contains a single shot that he claims will be perfect for the magazine’s final cover, but the numbered negative appears to be missing. Hoping to secure his place in the new Life paradigm, Walter sets out to find the missing shot; which soon means tracking down Penn’s famously grid-averse badass on his own. Fortunately, Walter’s schedule is pretty wide open: The only other thing he has going on is appearing in commercials for E-Harmony.

I’m not even kidding – the second major subplot of this movie is Walter’s bad luck in love, and it’s visualized through a series of phone conversations with the famous dating site’s customer service rep (Patton Oswalt) which play out as little more than an explanation of how the site works and an advertisement for how sophisticated their matching-algorithm is (to say nothing of their super-dedicated customer support staff!) This is the most bizarrely blatant bit of product placement (paid or not) that I can think of having seen in a modern movie… and I’m including the movies that actually were based on toy commercials. 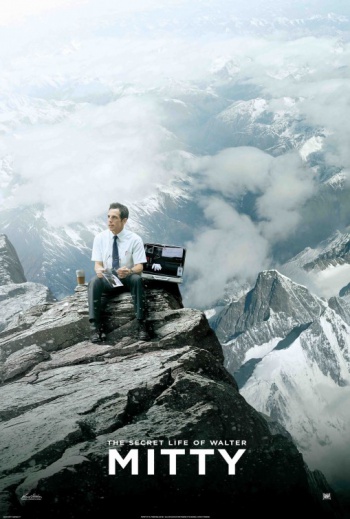 It would be one thing if that were an isolated issue, but the sheer amount of branded products bandying about the film both in plot and just in the background (a key moment takes place in the shadow of a massive Chase Bank sign) that it almost seems like a self-aware joke that never fully pays off. Along with E-Harmony, two major plot points revolve around the pizza chain Papa John’s – which ends up creating a plot-impossibility more amusing than anything in the film: Walter apparently worked there as a teenager (giving up his adventurous dreams in order to work and support his widowed mother functions as a kind of “origin story” for his sad-sackery.) Papa John’s was not founded until 1984. Ben Stiller is 48 years old.

After a point, it just becomes surreal: Another key scene involves Walter meeting up with a representative of one of the brands featured in the plot (it’d be a spoiler to say precisely which one) who serves as a kind of Guardian Angel figure appearing to facilitate the penultimate “So, what have you learned?” exchange with our hero. His first contribution? “Let’s go get some Cinnabon!”

And it all looks all the more strange because the film looks (and sounds) gorgeous. Despite the Adam Sandler-ready construction (dopey middle-class loser finds meaning through wacky adventures he’s cartoonishly unprepared for) and shameless corporate plugging, the film’s visual and aural cues are culled from the handbook of Indie Comedy: Meticulously-composed shots, crisp high-contrast cinematography, an existential-melancholy premise (again – our hero’s job is to help micromanage The End of Life) and a Starbucks Sampler CD soundtrack of classic and indie-rock staples. For whatever reason, The Secret Life of Walter Mitty, despite being a textbook simple-syrup Xmas-season family comedy (just blandly inoffensive enough for everybody!), wants to look and sound like a Spike Jonze piece.

There’s a scene (depressingly) early on that typifies the film: Through contrivances too awkward to explain, Walter has wound up back at the office with his childhood Stretch Armstrong doll in tow. He gets into an elevator with the evil Adam Scott character, whose obnoxious behavior triggers a daydream sequence wherein he tries to grab Stretch away and the ensuing struggle explodes into a Man of Steel-style superhuman fistfight; with the two men tearing apart the city as they bounce around, toward and away from eachother like human wrecking balls tethered by grips on the doll’s elastic arms. It goes on for a bit, looks extremely impressive and imaginative… and then it ends, with Walter blinking back to reality where his nemesis once against shrugs off his “weirdness” as he departs the elevator.

The story hasn’t moved, no new information or development has been established. Nothing, in effect, has happened. You can see the germ of an idea there: Walter’s insecurities about work projecting as a scenario where his boss is acting full-stop like a schoolyard bully trying to yank away what amounts to a security blanket. But it doesn’t have anything to do with anything, when all is said and done. Just a “cool moment” to fill time. The live-action equivalent of a Family Guy tangent, specifically a chicken fight – except Peter’s semi-annual battles with The Giant Chicken at least contain an element of parody (of the perfunctory nature of action movie setpieces and, by now, self-awareness of their own odd place in the series’ legacy) to justify their existence. Walter Mitty has no such luck.

Nintendo Is Taking the eShop Offline to Perform Emergency Surgery