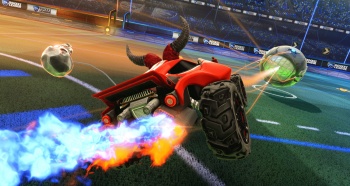 PC players can now play with both PS4 and Xbox One Rocket League players… just not at the same time.

As promised, cross-play has come to the PC and Xbox One versions of Rocket League, allowing players on both platforms to play together in harmony. Fans of the game will know that the PS4 version of the game has actually had cross-play for quite some time, which puts us in the incredibly strange position of PC players being able to play the game with both PS4 and Xbox One players… just not at the same time.

The reason? Sony has still neglected to accept Microsoft’s invite to allow cross-play between the two platforms. Rocket League developer Psyonix claims that the technology is all ready, and the fact that PC gamers can play with both platforms right now basically confirms that we are just waiting on Sony approval to “flick the switch”.

As for the Xbox One/PC cross-play, Rocket League is now the first-ever Xbox One game to support cross-network play with a Steam PC game. Players can toggle cross-network play on or off with an easy-to-find check box in the Options menu. There’s also a new patch for the game which adds the feature, alongside some small balance changes.

I think that it is really hard not to look at Sony as “the bad guy” in this scenario, although I’m not fully aware of all the behind-the-scenes stuff going on. Let’s hope it gets sorted out soon, because a world where players on all three platforms can play the same games together is alright with me!