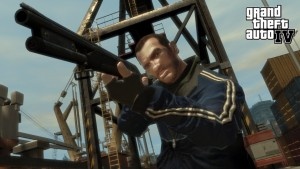 The popular and hilarious “radio stations” developer Rockstar includes in its open-world GTA series became so well-liked it inspired the savvy studio to sell the tracks separately online.

Originally Rockstar began using Amazon’s music store to distribute the songs to support DRM-free and to allow the artists to earn about $.67 for every $.99 purchase.

A month ago, Apple announced that it would soon start selling downloads without DRM. Although this change in Apple’s policy hasn’t been confirmed to have caused the switch, next week Rockstar will be ditching Amazon to push its songs through iTunes. It doesn’t help that Amazon’s Music Store, which has been opened for a year and a half, has seen little growth compared the the iTunes behemoth.
For Amazon’s sake I hope their newly released Game Downloads store sees more success.

The specific deal structure between Apple and Rockstar isn’t publicly confirmed, but increased sales from moving to a wider market will likely increase sales commissions for both Rockstar and its artists.

As an added bonus, GTAIV‘s bonus download The Lost and The Damned Xbox Live download pack will, along with game content for $20, add additional songs onto the local radio stations, tunes expected to be sold online as well.