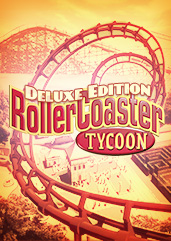 Rollercoaster Tycoon couples the addictive nature of a city management game with an amusement park setting and ride building mechanics that will have you spending hours designing and constructing the thrill rides of your dreams.

I’ve never been the biggest fan of amusement parks. In fact, I’d go so far as to say that there have been moments in my life where the prospect of marching beneath the gates of a family friendly theme park has been a source of legitimate dread. Mind you, it’s not that I’ve never had any positive experiences in these sorts of places, (Universal Studios+Fast Pass=Win), it’s just that I’m the kind of person who finds sitting down with a good book or a video game more enjoyable than waiting for hours in cramped lines to ride subpar attractions at an overpriced theme park.

The point is that I’m not the type who looks at something like Rollercoaster Tycoon and sees a must play game. My first time booting it up was done with a sigh. This wasn’t me picking out some ageless classic I’d been longing to play all my life. It was me trying to make sure I played something different every now and then. It only figures, of course, that I wound up loving the damn thing.

I suppose I shouldn’t have been too surprised by this. I’ve always been a sucker for games that entail building something from nothing and Rollercoaster Tycoon epitomizes this genre. The way it works is like so. You pick a level. Said level comes with a park rating and attendance number that you need to reach before the end of its time limit. Accomplishing this means constructing rides and shops, tinkering with prices and doing everything you can to improve your park and draw in new customers. In other words, it’s SimCity 2000 with an amusement park theme. 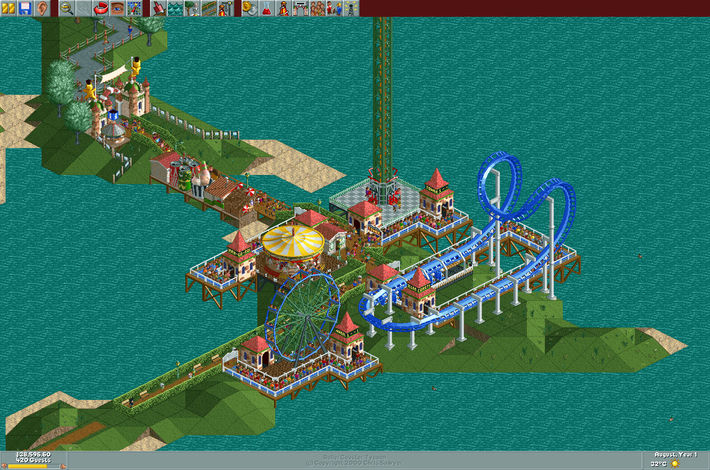 And while that might sound vaguely like a disparagement, I mean it in the best possible way. In case you’ve forgotten, I loved SimCity 2000 and the same elements that drove me to give it a rave review are present in Rollercoaster Tycoon. The process of building your park is just plain enjoyable. Even when you’re merely building simple rides like ferris wheels and haunted houses, there’s a tangible joy to picking the perfect spot for each new ride you buy.

Or better yet, creating the perfect spot for them. You see, while you can build your park on the map you’re given, the game also provides powerful landscaping tools that make it possible for you to reform and reshape the map to suit your needs. Now, I will say that I never fully became comfortable with the landscaping controls. There was just a level of awkwardness to them that I found to be fairly persistent. That said, the freedom they give you to customize the game’s environments is well worth the clunk.

Simply put, before I experimented with the landscaping, my experience was mostly my trying to squeeze as much profit as I could out of limited terrain. Taking that next step, in turn, completely changed how I viewed each map. I became less of a manager and more of a visionary, with the map serving as a canvas for me to imagine new possibilities and actually put them into play. All it took was fifteen minutes of digging ditches and raising hills to leave me completely and utterly hooked. 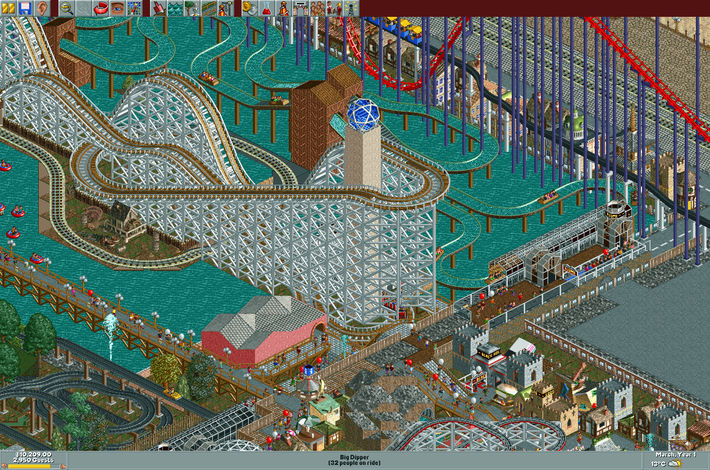 The same goes for the custom ride building which is, in a word, sublime. While I love management games like this, I’ll admit that they sometimes suffer from slow periods where you’re stuck waiting for more money or resources so you can get on with building things. I didn’t have many moments like this is in Rollercoaster Tycoon because they were filled by the process of imagining and building rides. Rollercoasters, water slides, log fumes; the game gives you a nice selection of rides that you can build from the ground up into grandiose attractions that would impress even the most stalwart of thrill enthusiasts. For my part, I never actually got all that good at building rides. Even when I produced something mediocre, however, it was still fun to watch my virtual guests board it, take it for a spin and, on occasion, burst into flames. (You really need to watch some of the YouTube crash montages out there.)

I also have to give the game credit for the fact that it manages to be legitimately challenging at times. Although it does a nice job of ramping up the difficulty gradually, meeting each level’s objectives can sometimes feel daunting. Granted, some of my difficulties did come from my tendency to get lost in the process of building a ride. It has definite elements of strategy games that really do require you to look at your situation and figure out the most efficient way to turn the cruddy park you’ve been shackled with into the sort of place football players want to go to after winning the Super Bowl.

In other words, even if you’re a crotchet guy like me, Rollercoaster Tycoon is definitely worth playing. While I’m not sure I’d necessarily call it my favorite park/city/etc management game (SimCity 2000 might still hold that spot), it’s a supremely solid take on the genre that’s addictive and offers the sort of freedom that other games only promise. This one’s a no brainer for me. If you’re looking for a new game and you have $5.99 to spare, pick up Rollercoaster Tycoon.

So we have some big changes coming to Good Old Reviews next month! Whereas up until now I’ve been doing a retro review every week, I’m going to be dropping that number down to two a month. In the off weeks, I’ll instead be writing features and editorials based on interesting things from the games I review. Case in point, in September I’ll be touching on the history of Dungeons & Dragons in video games. I’ll open with a review of Pools of Radiance for the NES, follow that up with two weeks detailing the franchise as it’s existed electronically and close with a review of Planescape: Torment. I hope everyone likes the changes coming and, as always, people can feel free to PM me comments and suggestions!

Friday Box Office: Guardians of The Galaxy Set to Become #1 Film of 2014

Defense Grid 2 Gives Everyone a Niche