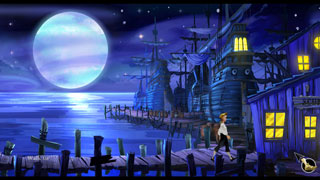 The creator of Monkey Island and Maniac Mansion wants Disney to sell him those IPs now that it’s out of the games business.

It’s been two weeks since Disney cancelled Disney Infinity and closed down Avalanche Studios. That closure means that Disney is out of the games business, except for the titles that it licenses to other companies.

Long-time game developer Ron Gilbert is seizing on this opportunity to try and re-acquire the IP for his classic point-and-click adventure titles Monkey Island and Maniac Mansion. In a tweet (seen below), he reached out to Disney, offering to pay “real money” for them.

This isn’t the first time that Gilbert has expressed interest in acquiring these IPs. Back in 2012, when Disney bought Lucasfilm and LucasArts, he said it was unlikely that Disney would do anything with the properties. In 2013, he wrote about what he’d do with a new Monkey Island game on his Grumpy Gamer blog.

While Gilbert would likely do something worthwhile with the IPs, the odds of Disney selling them off are likely small. What’s more likely is Disney offering some sort of licensing agreement to Gilbert, although it’s difficult to speculate on whether he’d be interested in that.

Still, I’d love to see Monkey Island and Maniac Mansion come back again. I’d play both of those.

Dear @Disney, now that you're not making games, please sell me my Monkey Island and Mansion Mansion IP. I'll pay real actual money for them.— Ron Gilbert (@grumpygamer) May 23, 2016

Overwatch Review – Your Watch Has Begun