Ronin is a turn-based 2D “ninja” platformer that draws its inspirations from the likes of other “strategic platformers” such as N+, and of course, Gunpoint. That last one is especially worth noting, as the visual style and gameplay elements of both Ronin and Gunpoint can be so strikingly similar that you’d be excused for thinking they came from the same developer. But they didn’t, as Ronin comes to us from the mind of indie Polish dev Tomasz Wacławek, and is published by the fine folks at Devolver Digital (of Hotline Miami fame). 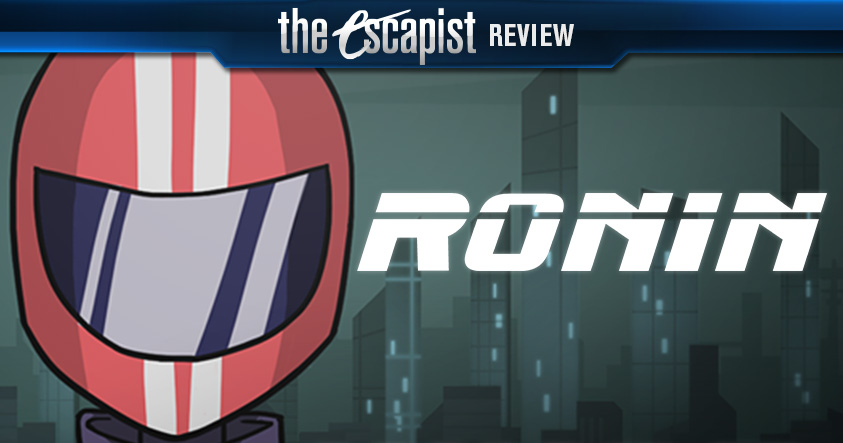 My first experience with Ronin was that of frustration. The game is incredibly light on tutorial opting to give obscure, unhelpful hints during the course of the game. For instance, one of the very first hints simply told me to “use the mouse to jump”. Left click didn’t work. Right click didn’t work. Middle mouse didn’t work. It took me a few minutes to figure out that I had to hold down left click, and drag the mouse up or down. One of the hints actually has the gall to lampshade the problem by stating proudly “these hints sure are helpful, huh?”

Ronin may be a game about a ninja, but it is anything but a stealth game.You can try and sneak around, staying out of sight-lines, picking off enemies one-by-one, but it often forces you into full-on combat, and in fact, actually rewards you for killing every enemy in a level. So since the Solid Snake option is out of the equation, the game lives and dies on its combat, which, honestly, isn’t great.

It relies on the unintuitive jump mechanic I lamented earlier, and consists mostly of jumping on top of guards to stun them, and then either killing them or leaping away if one of his buddies draws a bead on you. In theory, the combat system should be perfectly suited for the turn-based nature of the game – you have to plan out your moves and get yourself into a position where you can safely kill without being killed. In practice, the imprecise nature of many of the game’s core systems makes it an exercise in frustration. For instance, jumps will sometimes inexplicably fail to stun, and both the jump curve and enemy aiming sights sometimes don’t quite match up.

Don’t even get me started on the grappling hook, which never quite works the way you want it to.

As the game progresses you’ll get more and more tools to utilize in combat – such as the ability to throw your sword at an opponent or shoot out a fan of knives. It certainly makes things more interesting, and the strategy and planning does ramp up as you collect more and more toys, but the simple fact of the matter is that it’s not fun when you first start out. I shouldn’t have to work at a game for the promise of fun later on down the line. You will die, a lot, and unlike Hotline Miami where the adrenaline-fueled lightning-fast 80s-power-synth nature of the game kept you going and going, Ronin‘s slower pace makes your constant trial-and-error deaths all the more frustrating.

I’ve been quite harsh on Ronin so far, but it does have a few things going for it. The artstyle, for instance, is quite nice on the eyes. It’s very simplistic, sharp tones scream of the neo-noir worlds of Bladerunner and Kill Bill, and the little animations and effects are all spot-on. It’s similarly simple techno backing tracks do wonders in setting the mood of the game.

So, it’s a shame that Ronin doesn’t do anything, story-wise, with this set-up. The “plot” is a paper-thin revenge story: These guys killed your father so go kill them. That’s… pretty much it. While a lot of games can get away with such a lacking plot and tell the story by atmosphere, Ronin does not. I have no idea who any of these people are, and don’t really care for them at all.

In terms of content, you’ll blow through the whole thing in a matter of hours, though there is a “new game plus” mode at the end of it if you can stomach it.

Bottom Line: Ronin is a remarkably average game. When it works, it’s kind of fun, but there just isn’t enough here to maintain interest, and it has nothing that we haven’t seen before.

Recommendation: If you’re looking for the kind of experience Ronin offers, you’re probably better off buying Gunpoint instead.