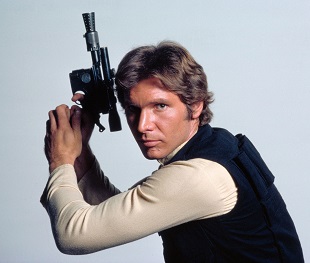 You love Han Solo, and he totally knows.

All six Star Wars films are going to hit your digital distribution platform of choice (iTunes, Google Play, etc.) tomorrow, and the films are largely unchanged from the Blu-ray releases we saw a few years ago.

But a rumored change in Episode IV: A New Hope is one fans the world over have been waiting for since long, long ago.

Badass Digest is reporting that Han Solo is shooting first yet again in Episode IV, and one of the greatest travesties in the Star Wars universe is finally being put right.

Let’s be frank: A number of changes made to the original Star Wars films have been met with…well the word certainly isn’t praise. Chief among them? Han Solo’s encounter with the bounty hunter Greedo in that infamous Mos Eisley cantina. Back in the day, Han shot first, Greedo was left to dwell in his own misfourtune, and Han walked out of the bar like a boss.

Then came the 90’s. Along with myriad other changes in the Star Wars: Special Edition trilogy, George Lucas altered the scene to have Greedo shoot first, only to have Solo fire back under the table immediately.

Along with scattered reports about Disney working on restoring Episodes VI-IV to their original cinematic glory, this move goes a long way in showing that Disney wants what the fans want: The original films, sans-changes, in high-def.

And if the rumor/report isn’t true? We still have those original edition films to (possibly) look forward to. And…well, just shut your eyes whenever Greedo shoots first, and pretend like it never happened.

8 of the Most Awesome MMO Boss Fights

Call of Duty: Black Ops 3 Gets A Teaser Trailer