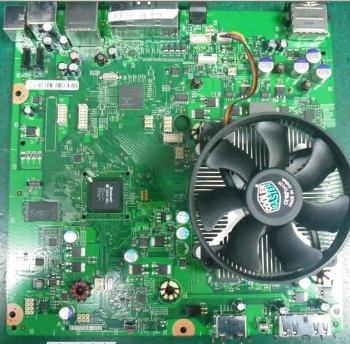 Leaked images may prove that Microsoft is planning to slim up the Xbox 360 sometime this year.

Over the years, console makers such as Nintendo and Sony have redesigned the first versions of their machines to reduce cost of production. Through Chinese forum A9VG, two images of a rumored “slim” Xbox 360 have surfaced, fueling talk that Microsoft may do the same and announce a redesign sometime in 2010.

One of the images gives a full view of a supposed more compact Xbox 360 motherboard while the other focuses on the new combination of the CPU and the GPU into one chip. The changes made, if these images are not fakes, would most likely be something more than the incremental redesigns Microsoft has been regularly doing to cope with the issues that caused the RROD fiasco.

Over on Joystiq, system modder/artist Ben Heck speculates that the new motherboard could include some kind of functionality for an internal hard drive, and notes the lack of a slot for memory units, which goes along with the recent announcement of Xbox 360 USB storage support. Microsoft may be moving away from memory units completely with the Xbox 360 slim (again, if it’s even real).

There are even more rumors that Microsoft will announce a price cut on the Xbox 360 this year, and a new slim model could allow the company to do that more easily. Everything makes sense about this, especially with the release of Microsoft’s Project Natal coming up, as it could bundle the two together and market the 360 to a new audience. You know, the audience that’s used to flailing their arms around wildly while playing games on the Wii, a console the size of a TV dinner.

ARG Designer Believes Online Gaming Can Save the World