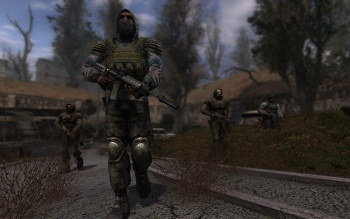 Rumors are swirling that work has begun on a new S.T.A.L.K.E.R. sequel.

Allegedly titled S.T.A.L.K.E.R. 3: Apocalyptic, the follow-up to this year’s S.T.A.L.K.E.R.: Clear Sky will bring a number of changes to the post-nuclear FPS franchise, should the rumor mill be believed. The scope looks to be widened, with a larger game world filled with optional areas and side quests. Zones won’t be separated, either, but loaded dynamically. Furthermore, it sounds like plot-centered main quest missions might be totally eschewed for more sandbox-style encounters wholly driven by player choice. New factions, enemies and vehicles (finally) round out the rumored features list, which comes by way of Russian site STALKER-Planet claiming a source close to developer GSC Game World.

To reiterate: all this information sits squarely in the realm of unofficial rumor-dom. Admittedly, there is a slight air of “too good to be true” surrounding it all. Every improvement listed seems to tackle the most outstanding fan complaints of the S.T.A.L.K.E.R. franchise. So is this wishful thinking in the guise of official information or the real deal? Hopefully we’ll find out sooner rather than later.

Credit goes to the fans at Through the Looking Glass Forums for translating the original Russian report.