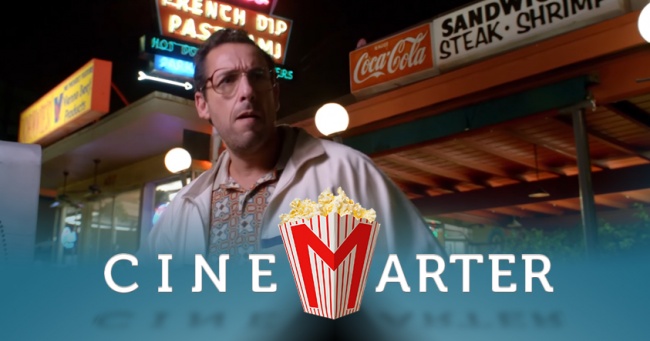 We’re now three movies deep into the Netflix-Adam Sandler experiment, with no end in sight, and the question that keeps coming into my mind is “why?” Why does Netflix think that this will keep or gain subscribers? Why do I keep volunteering to watch these atrocities? And, perhaps most pressing of all: why are all of the Adam Sandler comedies of late so terrible? I mean, at one point, Sandler was a draw because he could actually make people laugh with him. Nowadays, the majority laughs at him.

His new film, Sandy Wexler, which runs for an indefensible running time of 131 minutes, kind of, sort of, maybe explains that. Sandler plays Wexler, a talent manager working in 1990s L.A. He’s not very good at the job, but somehow he gets people to hire him and sometimes he books them gigs. Not good gigs, and they’re not talented people, but that’s the story of his life. As we progress through the film – which covers a decade – and we see so many Sandler staples stuffed into the film, the answer to “why?” becomes a little more clear: it’s all about loyalty.

Much like the Wexler character, Sandler is making these movies and including everyone he’s friends with in them not in hopes of making good art, or even enticing the audience to laugh, but to have fun with his friends and make sure that they’re getting work. Would Nick Swardson still be in this business if he wasn’t Sandler’s friend? Maybe not. But he is, so he gets roles in movies like this, gets a paycheck, reminds us that he exists, and gets to have some fun. Sandler’s taking care of someone he cares about, putting that loyalty ahead of anything else. That’s … almost admirable, I guess.

Of course, the movie is a terrible waste of space, time, and resources, but that shouldn’t surprise you. Somehow, some way, it runs for longer than two hours, which is inexcusable. It was a problem with The Ridiculous Six, too, you’ll recall. But these movies won’t go down to a more manageable running time because then Sandler might have to cut a scene or two with a friend. And since it seems clear at this point that this is the primary reason to make these movies, that’s not going to happen.

Even if you’ve seen everything else Netflix has to offer, there are better things to do than watch Sandy Wexler.

Sandy Wexler throws in even more cameos, framing its story as group retelling from a variety of entertainers who were working at the time – your Lenos, your Penn and Tellers, your Vanilla Ices, and so on – as they essentially mock but kind of respect Wexler as a character. You probably wouldn’t want Wexler himself to represent you, but someone with a kind heart, diligent work ethic, and loyalty for miles like Wexler.

Sandler, as Wexler, gets to dress up like a nerd with little fashion sense and a put on an even more nasally voice than usual, ensuring that we absolutely hate him from start to finish. His attractive female celebrity co-star this time around is Jennifer Hudson, who plays a singer he discovers at an amusement park. She … also isn’t funny, but it’s hard to figure out if it’s her fault or the script’s. The film only contains a couple of chuckles – no full laughs – in its painfully overlong running time (I can’t stress that enough), so it’s hard to actively blame any of the actors for failing to do anything with it.

I suppose it’s a positive that Sandy Wexler is “about” something, and it’s even a little fitting that its loyalty-above-all message is being delivered on the same weekend that The Fate of the Furious and its theme of “family” is being driven home. I don’t know if that’s enough to even start to admire Sandy Wexler – it’s such an absolute waste otherwise – but fair’s fair, and I’ll acknowledge that, at a minimum, it’s technically got more going on in its head than the last two Netflix-Sandler joints.

Still, that doesn’t mean Sandy Wexler is worth watching. It’s not even worth considering watching. Even if you’ve seen everything else Netflix has to offer – not including the previous two Sandler movies – there are better things to do. Also, you’re a liar. You haven’t watched everything else on Netflix. Nobody has that kind of time. Sandy Wexler is terrible from start to finish. It’s not funny, it’s really annoying, and it’s 131 minutes, which is at least 180 minutes too long.

Recommendation: Nobody should be subjected to this.

Master Java with the 2017 Complete Java Bundle and Save 95%