[puzzle=2]I ended up reading a lot of H.P. Lovecraft on my recent oceanic voyage, because nothing rocks you gently to sleep at night quite like imagining the tentacles of Nyarlathotep draped lovingly around your shoulders, and it struck me that his style of horror loses something when read from a modern standpoint. Good ol’ H.P. sauce was writing during a time when the march of science and astronomy was mapping the universe, and humanity was finding it increasingly harder to overlook the fact that it seemed less like we were God’s special chosen ones and more that we were a freak patch of grime clinging to the side of a rock floating through nothing. The whole notion of “cosmic horror” refers to a sense of dread and hopelessness brought on by the mere idea that aliens could exist. That we are almost certainly not the only form of sentient life that’s ever existed and probably not even in the top ten. There are a few Lovecraft stories – like The Shadow Out Of Time – where the reader is expected to be horrified at the existence of aliens who actually come across as quite courteous and obliging.

And I don’t think that has quite the same impact now most of us have basically accepted the depressing fact that we’re an accident of random chaos in the godless miasma of existence. I like to think that we’ve been sufficiently conditioned by fiction and scientific theory, and if a crack in space-time popped open in Leicester Square tomorrow and a bunch of formless shoggoths marched out with suitcases in tentacles asking to apply for immigrant housing, then most of us would eventually be able to deal with it without tearing our eyeballs out and booking a stay in Arkham Asylum for the bank holiday weekend (the Lovecraft one, not the Batman one).

But regardless, as I said in the Amnesia: Dark Descent review, a recurring element of Lovecraft-inspired games are sanity meters, extending even to the Call of Cthulhu pen-and-paper RPG and the Arkham Horror board game. And as an element of a horror game I’m not sure I approve. I’m iffy about any gameplay mechanic that imposes an emotion upon the player character, because if the designer did their job properly then the player should be feeling that emotion anyway. It’s like when a game forces me to go rescue some kidnapped love interest I hate because, no really, your character totally loves them, guys. Having a blurry screen effect and heavy breathing sound to show your character is shit scared just seems unnecessary if the player actually is shit scared, and almost comical if they aren’t.

Let’s go through a little digest of other games that have implemented sanity meters, and how well it worked out for them.

While not being overtly Lovecraft-inspired, Fahrenheit’s plot does feature H.P.’s beloved theme of body swapping, and by the end of it I did want to tear my own eyes out, so I’ll allow it. Since Fahrenheit (or Indigo Prophecy if you’re in the wrong country) was an “interactive narrative” like its spiritual successor Heavy Rain, and the sanity meter was the only token acknowledgement of that whole “gameplay” thing besides rounds of quick time events. If too many bad things happened to your character then they’d curl up into a ball and refuse to go on, which was a bit prohibitive towards the interactive narrative thing. It was like one of those Choose Your Own Adventure books where it proudly claims “21 DIFFERENT ENDINGS!” but 20 of them are just you getting killed three entries in. 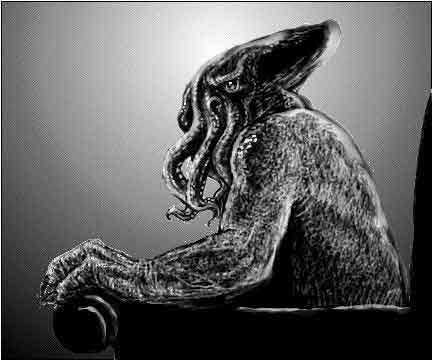 The Clock Tower series started off on the SNES with the best of intentions – a survival horror game that de-emphasized combat, not unlike Amnesia and Penumbra, where your only option is to hide. Clock Tower 3 continues this to a certain extent. Its sanity meter goes down when the monster finds you, and when it reaches zero you panic, which makes you vulnerable to a final attack. Fair enough. But then things get a bit weird. Your miniskirt-wearing schoolgirl heroine transforms into a battle valkyrie and fires magically-conjured arrows at the monster to defeat it once and for all, undermining the horror theme somewhat. Did I mention this is a Japanese game?

Also, incidentally, CT3 contains some of the most spastic character animations I’ve ever seen in a game. In some cutscenes people throw absolute fits while conversing with each other. It’s like they stuck all the motion capture balls on an octopus in an electric chair.

Get the fuck out of here, American McGee’s Alice. Everyone knows you just took a health meter and stuck a sanity label over it, you big fat cheat.

Call of Cthulhu: Dark Corners Of The Earth

The only direct adaptation of Lovecraft’s work on this list, DcotE starts promisingly with a memorable and panic-inducing chase sequence through the streets of Innsmouth but then descends into mostly gunplay and wonky stealth. The sanity meter was not unlike Amnesia’s in that it largely just made the screen go blurry and wibbly-wobbly, to the extent that some moments felt like I’d gotten my head stuck in a Vaseline-smeared fishbowl. I’ve heard that if your sanity gets low your character spontaneously shoots himself in the face, although I played it all the way through and that never happened to me. For which I’m grateful, because I couldn’t imagine a more irritating mechanic. Imagine if you’d saved just beforehand.

And finally we come to perhaps the most overt use of sanity meters in a game, in this decent Gamecube action-adventure developed by Silicon Knights before they got sucked down into the sickening morass of Too Human. The sanity meter was probably also the most mechanical of the lot: You had a big on-screen bar that went down when monsters looked at you funny and went up again when you hacked cathartically at their corpse. If it got too low the game would start playing quite devious tricks on you – pretending to delete your save games, faking a bluescreen of death, or making a volume counter appear and start ticking down so you thought you were sitting on the remote control. Sadly, sanity was so easy to restore, especially once you had the magic spells, that the only reason a player would stay insane would be to see all the funny effects. And that’s not horror anymore. Consider the difference between being chased down by a lion and coming to a zoo to look at one eating its own shit.