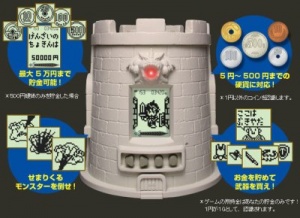 The nation that has given the world everything from the code of Bushido to vending machines that dole out panties has done it once again, this time with a new piggy bank that lets you save the world while you save your money.

BankQuest, from Takara Tomy, is a tower-shaped coin bank with a built-in action-RPG that’s played through a small LCD window mounted in the side of the bank. Buttons underneath the screen let players control the game’s hero as he fights his way through a monster-infested tower. More than just hack-and-slash action, though, the game is also an incentive to save: Equipment for the in-game character, necessary to defeat the tower’s denizens, can only be purchased by putting real money into the bank.

The game world of Gorudopia, the tower-within-a-tower, features 100 floors crawling with more than 180 different monsters; to help battle them, bank owners will have access to more than 160 different items, with a total value of roughly $100. Without those items, and the money necessary to buy them, Wired’s Game|Life blog says you’ll never beat them all.

The banks are designed to take Japanese coins of up to 500 yen (a little under five bucks) and since as far as I can tell it’s only going to be released in Japan, a version for U.S. currency (and the English language) seems unlikely. Still, if this sort of thing is your bag, specialty importers will likely have it available for sale in North America soon after its August 7 release. To get a look at BankQuest in action, check out the TakaraTomy website; it’s entirely in Japanese but not terribly difficult to figure out, and you can even drop in some virtual coins to see how it works. BankQuest is expected to retail for about $40.