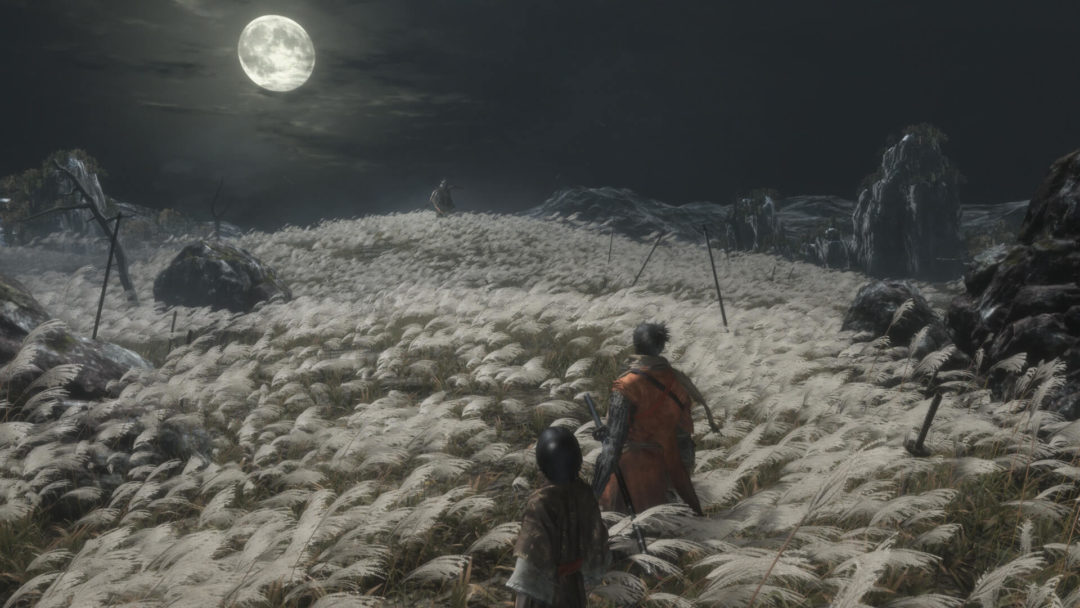 When a ninja throws an industrial wrecking ball into the oozing carapace of a badly beaten spider the size and girth of an adult sperm whale on the night of a full moon, it must make a specific sound. Nothing in reality sounds like 12,000 pounds of forged steel connecting with demonic exoskeleton and bloody trichobothria at the precise moment a shadow warrior flips into the night sky with all the weight and incident of a butterfly alighting from an ear of corn. There’s got to be a German or Russian word with this exact meaning, an onomatopoeia that is both the sound itself and the name for all ninja wrecking ball throws made against giant spiders. I have no experience with this sonorous tone, even though I’ve played through the first mission of From Software’s Ninja Blade about a dozen times. Hearing the sound of the wrecking ball connecting with the spider is impossible for me. Every time I play the game and get to this moment, I’m too busy reflexively screaming, “OHHHH DAAAAAMMMMN!” to hear what’s happening in the game. I can’t help it. I’m not a ninja. I’m only human and I have to react appropriately when something that totally sweet happens.

Ninja Blade is From Software’s best ninja game of all time, including Sekiro: Shadows Die Twice. At least it’s the best version of a specific type of ninja game.

Ninja Blade is many other things as well. It was the last major original action game made by From Software before it released Demon’s Souls and gained global renown for the uncompromising, singular take on roleplaying and fantasy that has dominated its output since. Arriving at the beginning of 2009, Ninja Blade also capped an era for the developer, a transition from the PlayStation 2 and Xbox to the PlayStation 3 and Xbox 360’s reign. During that stretch, From was best known for spectacularly weird schlock games that were as memorable for their aesthetics and bananas stories as they were for their mechanical jankiness. It was an evolutionary dead end for 3D action games as they were conceived during that hardware epoch. From Software blended Devil May Cry’s penchant for hilarious, awesome spectacle, with God of War’s use of simple, timed button presses that let you interact with those big scenes, and the leather fetish ninja nonsense of 2004’s Ninja Gaiden, adding its own surrealist bent that was best embodied by the developers two Xbox Otogi games. Ninja Blade attempted to make a definitive statement out of a decade of  2000s 3D action games about shoving giant swords into preposterous monsters.

Ninja Blade didn’t achieve that goal. Despite the subdued color palette and dour violence — there’s a look and feel at work here that would carry over into From’s cycle of Souls games — Ninja Blade is a good looking game. It was developed as an exclusive for Microsoft Game Studios and setpieces like that first boss fight against a demon spider on a skyscraper rooftop make particularly good use of the Xbox 360’s horsepower, enabling the game to capture a specific tone. The action, however, suffered from the same awkward execution that marred almost everything  From Software churned out during its first 15 years as a studio.

Regardless of the genre, From’s games always felt a little off. Ninja Blade was no different. Ken Ogawa, our ninja hero killing monsters for the Global United Infestation Detection and Elimination paramilitary group, looks rad when he’s jumping out of helicopters, but lacks grace when you’re steering him through caves and demolished parking garages. The swordplay and spellcasting never feels as balletic or blunt as it does in Ninja Blade’s peers. That still doesn’t dull the cumulative impact of the game’s bonkers scenario. Who cares that the swordplay isn’t exactingly precise when you get to collapse an entire highway on top of a manticore with the head of an old man and then use a steamroller to crush his daughter, who’s made of snakes, all so you can save your ninja dad? That’s not the finale of Ninja Blade. That’s just the third level of the game.

If it isn’t clear yet, I’m being facetious when I say Ninja Blade is a better game than Sekiro: Shadows Die Twice. I might enjoy Ninja Blade more, but Sekiro is in almost every way a more accomplished game in terms of scope and execution. Kazuhiro Hamatani — Ninja Blade’s lead planner, Bloodborne’s lead game designer and Sekiro’s co-director — has clearly grown alongside the rest of his team at From Software over the last decade as the studio’s fame and resources blossomed following Dark Souls’ success. Sekiro never feels off the way Ninja Blade did. Like  the supernaturally gifted ninjas at the heart of the game, Sekiro is  utterly precise.

That said, I’m not being wholly disingenuous when I say that Ninja Blade is a better ninja game. There are two veins of pulp ninja stories that have dominated the past 40 years. On the one side, there’s the classic medieval ninja — a master of stealth sneaking around the latticed fortresses of Sengoku-period samurai warlords, throwing smoke bombs and shuriken in silence, and participating in high intrigue and low skullduggery. This is the ninja tradition Sekiro is born from, its pop roots drinking deeply from the soil of ‘70s manga like Lone Wolf and Cub as well as movies like Satsuo Yamamoto’s Ninja, a Band of Assassins. Japanese game developers have been toying with these tropes from the beginning of the industry, starting with ‘80s titles like Taito’s Legend of Kage and Jaleco’s Ninja JaJaMaru-kun. There is, however, another ninja, one whose origins are more directly tied to video games. This is where Ninja Blade comes from.

Fueled by a love for grungy dystopian American cinema like Streets of Fire and The Warriors and seeing profitable opportunities in 1980s America’s insatiable hunger for ninjas and martial arts gimcrack, game developers started churning out ninja games with the explosive theatricality perfectly embodied by Ninja Blade. Games like Sega’s Shinobi didn’t star stealthy masters of deadly arts but a sword-wielding dude dressed like a Prince backup dancer who could vanish at will and sicced snow-white wolves on terrorists at international airports. Ninja Gaiden’s Ryu Hayabusa threw magical fire whirlwinds at demon lords on behalf of the CIA. Strider’s titular ninja wore a scarf that refused to obey gravity and fought Boba Fett ripoffs in his spare time after reducing building-sized robo-apes to molten slag in a futuristic Soviet Union. This is the tradition of the video game ninja: action so outsized it should by rights tip over into farce but somehow remains gripping because you, the player, get to make it all happen.

As an expression of that tradition, Ninja Blade remains a triumph 10 years later, its pageantry every bit as luscious now as it was then. Playing it in the wake of Sekiro, its impressive to see how From Software still leverages the same techniques for grand effect, including the one Ninja Blade was most derided for. When Ken throws that wrecking ball at the spider, all you’re doing with the controller is pressing specific buttons when you’re prompted to on the screen (a technique still called a Quick Time Event decades after Shenmue director Yu Suzuki coined the term.) That mechanic is still in Sekiro, it’s just more subtly integrated. One of the most memorable moments in the early game is your first encounter with a giant snake in a cramped valley pockmarked with caves. You can only sneak by the big freak when you hide in a little hutch and wait for it to peer inside, at which point the game prompts you to stab it in the eye.

That moment hits like the proverbial wrecking ball even though the player’s role in the attack is largely an illusion. It creates an incredible connection. “Once the player becomes an observer or outsider,” said Hamatani in an interview just before Ninja Blade’s release, “he or she will lose the sense of unity with the main character, so we tried to be careful in that respect.” He is clearly still being careful. Ninja Blade is a very different sort of achievement in formidable ninja game-making, but its influence can still be seen in its creators most recent achievements.

Stabbing a giant snake with a sword does, however, seem awfully pedestrian once you’ve dunked an actual wrecking ball into a giant spider’s face.