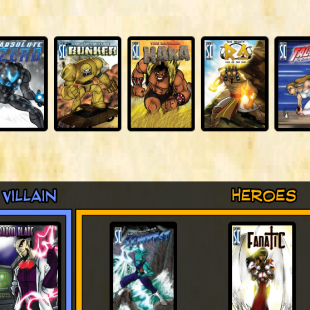 Sentinels of the Multiverse has fast become one of the most popular cooperative card games in tabletop gaming (and multiple expansions and a spin-off minis game has only added to its success), so in a way it was only a matter of time before a video game adaptation. As a longtime fan of the series, I was both excited and reluctant to hear that a mobile version was in the works. But after a running through a few matches, I was happy to see that it’s a faithful adaptation of the base Sentinels game, only with one important component missing that can hamper the whole experience.

If this is your first time hearing about Sentinels, here’s how it works: Each game consists of 3-5 different heroes battling against a villain, with a themed-environment adding a random element into the mix. Each hero, villain and environment comes with their own unique deck of cards, and the challenge of Sentinels is figuring out how to best use the heroes you’ve picked to defeat the villain (and their minions), on top of surviving whatever random events or problems the environment deck might introduce.

The sheer amount of variety and challenges available in this game is Sentinels‘ greatest strength in both the card game and digital formats. There’s a huge amount of variety available in the combination of heroes, villains and environments you can pick from (even with the base game’s limited selection), and no two games play out exactly alike. The heroes each have their own unique sets of abilities and can fulfill different roles depending on the situation. The Visionary, for example, is a psychic heroine with a deck focused on manipulating what cards can be played by the villain and helping allies draw more cards, while the patriotic Legacy can provide damage boosts to other heroes or redirect all damage to himself, acting as a shield. How you combine the two together along with other heroes to say, defeat the machine armies of the rampaging robot Omnitron, is the best part of each game, and figuring out all the different combinations and strategies will hold your interest for a long time.

Managing an entire team of superheroes and then organizing of all of their cards and effects can seem intimidating, but thankfully, the video game version does an excellent job of keeping track of all of the math and moving parts that have a tendency to slow down the original card game. Whenever you use a power to attack an enemy or provide an effect, the game provides you with all the legal targets, lets you know what bonuses or negatives are in play, and adjusts the game board accordingly. This does help keep an even pacing, but the interface can be problematic on occasion as you’ll need to tap through different menus in order to see who has what out on the board or in their hand. Add the fact that you can’t cancel an action when you’ve played a card or power wrong and have to go into an entirely separate menu to rewind a character’s turn is also annoying.

Interface woes aside, what harms Sentinels the video game the most, though, is how the cooperative element of Sentinels card game is lost in the transition from tabletop to digital. Some of the most enjoyable parts of the card game are discussing strategy with your friends, figuring out the best way to handle any problems the game throws at you, and discovering the various power combinations each hero has to offer. While you can technically pass your iPad around between yourself and your friends to play out a game, it doesn’t exactly provide the same experience.

Bottom Line: Sentinels of the Multiverse: The Video Game is a faithful adaptation of the card game that maintains much of the fun of the original, while alleviating some of the issues with handling the math. Its UI can be a little confusing to navigate at times, but its one real flaw is that it doesn’t maintain the cooperative nature of the analog version that makes it so enjoyable

Recommendation: Mobile gamers looking for an in-depth card game will enjoy the amount of variety that Sentinels contains, and enjoy figuring out how the ways they can save the world from dastardly evil-doers.

Plague Inc. Downloads Up 50% Thanks to Ebola Panic