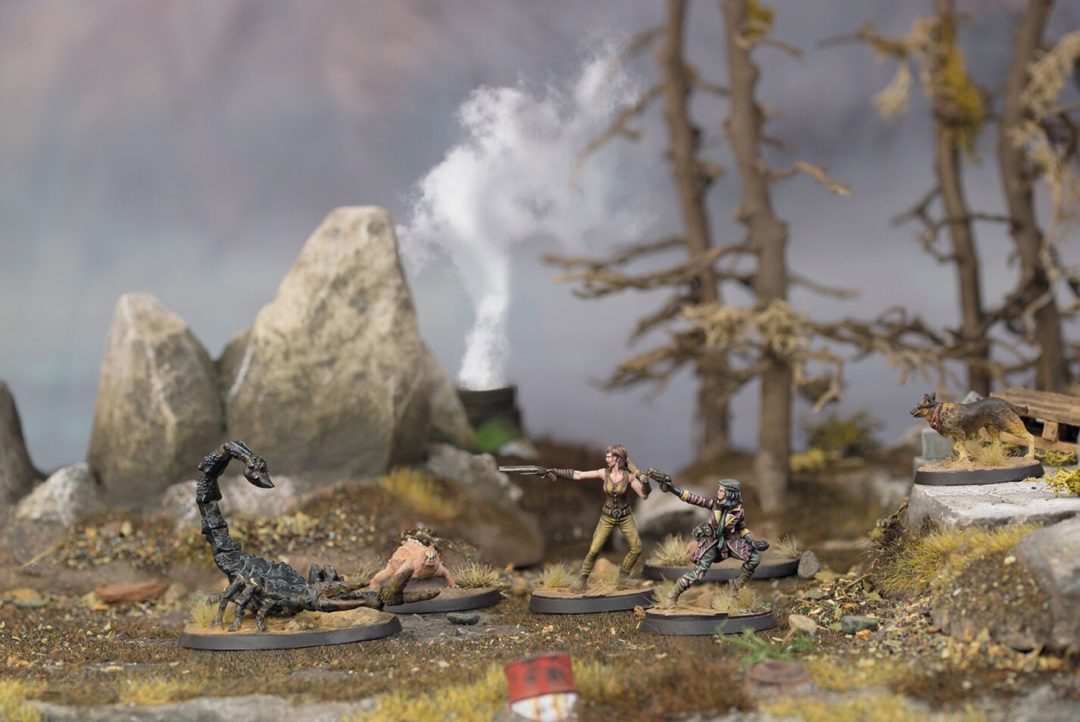 The Fallout video game series may have fallen on appocalyptically bad times, but players in love with its setting and characters have some new ways to explore it. Fantasy Flight developed a surprisingly authentic board game adaptation that came out in 2017 and Modiphius Entertainment let players duke it out in the Fallout: Wasteland Warfare tactical miniatures game, which hit stores last year. Now Modiphius is letting players really put themselves in the shoes of a denizen of the Wasteland with a role-playing expansion to that game, which will be available later this year, and a new tabletop RPG dropping in 2020.

Escapist Magazine: What made you decide to expand the Fallout miniatures game into a tabletop RPG?

Chris Birch: Fallout has been at the top of a dream list for me for years and getting the rights to create a narrative based, storytelling miniatures game in Fallout: Wasteland Warfare we were able to create something that was almost a role-playing game on the wargame table. So the short hop to an actual RPG expansion made complete sense. Of course once you’re there, the jump to the full blown 2d20 RPG edition was the logical next step.

EM: What made you also decided to develop an RPG that could be played without the minis?

CB: Our very first published game was Achtung! Cthulhu. It was created with dual stats for Savage Worlds and Call of Cthulhu as I knew we’d hit two quite different audiences. The first and easiest release for us is a simple expansion for the miniatures game — though you can play it without the minis if you prefer. We actually expect one in three scenes to be minis based, but the rest will play out much as any RPG would. For example, you don’t need to layout out a wasteland town for the players to simply move around talking to people. Using the same rules you can play out tactical scenes without minis.

Now for those who prefer not to come near minis for their role-playing and tactical scenes to be played out in the mind’s eye then the 2d20 version is obviously aimed at them. It will be more cinematic, allow for more detailed character creation and evolution, and facilitate a wider range of options. I think we’re going to have two different audiences and it would be a shame not to make sure everyone had a route into being able to roleplay with official rules in this wonderful universe.

EM: What sort of character archetypes will be available in the game?

James Sheahan: In the Fallout: Wasteland Warfare RPG, players will be able to play a wide variety of characters from a Forager to a Fixer, from a Handyman to a Sniper, from a Pilot to a Thug, and others. There are a couple of Super Mutants and a Mister Handy to pick from too.  Players select a starting profile, which sets their initial attributes, skills, abilities, etc., and then they tailor it with perks and skills. Over time, players can develop their character further as they progress (assuming they don’t meet a quick end as the Wasteland is very dangerous).

EM: How will settlements be integrated into the gameplay?

JS: The settlement is the main homestead or camp for many inhabitants of the Wasteland.  Characters may want to remain in an area and build up a settlement to serve as their base of operations. At other times, characters may come across settlements that need assisting, investigating, controlling, attacking, etc. Settlements come in many different forms from a simple farm to the insides of a beached tanker, so the section on settlements in the Fallout: Wasteland Warfare RPG provides advice for GMs on what a settlement might contain and what characters may want to include when building their own, including some basic structures.

EM: What are the advantages and challenges of developing a game based on such a popular property?

CB: Well of course you have to get everything approved and with such a major franchise like Fallout. The video game developers don’t want to be painted into a corner by us saying there’s something here on the map when they later decide to cite a feature there. As a result, we have to be careful about detailing the known world but when we create missions and adventures letting the game masters place them anywhere they want. This actually means no matter which part of the Fallout wasteland you like, you’ll be able to set our adventures there. Bethesda has been amazing to work with, and they have let us be creative with the miniatures. It’s all about building up trust so they know we’re going to treat the world with respect.

EM: What examples from your past work are you drawing on?

CB: We’ve made a few role-playing games now like Conan, Star Trek and Achtung! Cthulhu, so we’re not coming at this wild eyed. However integrating with a miniatures game for the first release was a challenge, though thankfully not that hard as we’d always wanted the miniature game to have some role-playing elements to it. We just had to connect some dots and fill in the rules.