When the end credits roll for Anonymous and audiences are reminded that the deliberately-paced, fiendishly-smart, luridly-ribald Elizabethan period-drama they’ve just finished watching was directed by Roland Emmerich – better known for disaster blockbusters like Independence Day and 2012 or sweeping epics like The Patriot or 10,000 B.C. – they’d be forgiven for assuming that it might actually be the work of someone else entirely; particularly since that’s the very premise of the film itself.

Anonymous, which opens in the United States in a water-testing “limited release” this weekend, is a dramatization of one of the oldest and most enduring conspiracy theories in the realm of world literature. Commonly referred to as “The Oxfordian Theory”, it holds that William Shakespeare did not actually author the plays, poems and sonnets credited to him but was instead “standing in” for a nobleman named Edward De Vere, the 17th Earl of Oxford, who authored them in secret in a time when such hobbies were thought unbecoming of his station.

The theory itself, despite its endurance, is supported by extraordinarily slim (to the point of nonexistent) historical evidence; and the film makes very little attempt to play it otherwise: The events are framed as a one-man-show stage performance being given by actor Sir Derek Jacobi, himself a real-life supporter of Oxfordian theory, and presented less as real history than as the sort of edgy, grimy period soap-opera that’ll be instantly familiar to fans of The Tudors or the two Elizabeth films (who are, incidentally, the folks who will probably enjoy it most.)

The mere mention of this particular conspiracy is enough to send most academic drama scholars and traditional Shakespeare fans into fits of shaking rage, which makes the film as close to a “lightning rod” as something that mainly endeavors to be JFK for drama club geeks can probably get. Having seen the movie, I can’t say that they won’t be outraged at this story’s vision of The Bard himself – here seen as a boorish, semi-illiterate actor who isn’t even the most active or inciting figure in the actual conspiracy – but I’d posit that, if they’re willing to look beyond this most show-offy element of the piece, they may find a film that paradoxically pays Shakespearean drama itself extraordinary compliments even as it scandalizes the author. A weirdly appropriate irony, that.

The “trick” is that, as previously noted, that which is the key piece to the theory – that history’s most famous author didn’t really write anything – is a fairly small piece of the actual story. While most attempts to “flesh out” this idea focus on an Amadeus-like clash of creative egos; Anonymous is more concerned with imagining a more elaborate answer for why De Vere would put both his creative labors and his noble reputation on the line. What they’ve come up with: Politics, backstabbing, revolution, revenge, forbidden love, all the good stuff – what else?

Specifically, Anonymous aims to be a movie not just about art and literature as tools of expression but also as weapons of social-upheaval and political revolution. As the film opens, Queen Elizabeth (Vanessa Redgrave) is slowly succumbing to the madness of old age while various nobles scheme to channel the coming transfer of power (Elizabeth had no acknowledged blood heir) in ways suitable to their own interests. De Vere (Rhys Ifans, in a potentially career-redefining performance) had an adulterous affair with Elizabeth in his youth and still cares for her, and as such is engaged in elaborate subterfuge to ensure the crown passes to those who would uphold The Queen’s will; while her treacherous advisors The Cecils (David Thewlis and Edward Hogg) scheme to maneuver their secret ally James of Scotland onto the throne. Fans of such costume-drama skullduggery will be unsurprised to learn that De Vere and the Cecil Family are both relatives and bitter enemies with personal scores to settle. 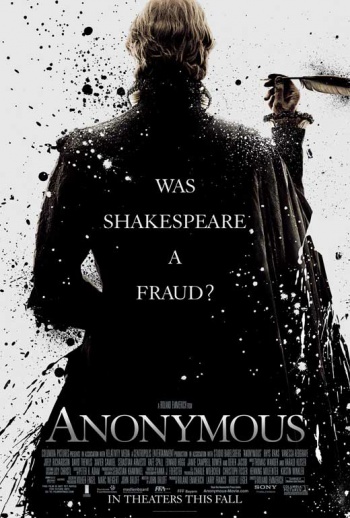 De Vere’s gambit: Noticing the ability of plays to stir up the emotions of the working-class crowds that primarily attends them, he aims to release his secretly-composed dramas promoting his philosophical ideals and taking thinly-veiled swipes at his political adversaries to the public in order to turn popular-opinion in his favor. While his original choice of ally is mild-mannered Ben Johnson, it’s Johnson’s rowdy, devious actor friend Will Shakespeare who jumps at the opportunity to become the public face of the Big Lie – for a price. A quick google-search of any of the real-life figures involved in all this will tell you that it’s all fated to end badly for them, but the getting there is kind of fascinating in a sleazy “famous folks behaving badly” way – particularly a third act that mashes up the opening monologue of Richard III with an armed insurgency, a massacre and gotcha revelations of sexual-deviancy that seems to be dropping the gauntlet in front of every other gothic melodrama in the pipeline and sniffing, “Your move.”

Since this is the film’s main contention – that Shakespeare’s plays weren’t just well-written material but game-changing events that reshaped the course of history – it’s no surprise that the film’s greatest strength (and the area where it would most appeal to even the most enraged traditionalist) is in the portrayal of the Elizabethan Theatre itself. This is not the prim and proper Classical Theater we imagine today, or the gauzy fairystory of Shakespeare in Love; Anonymous sees it as it was: A dangerous, downmarket business aimed at the unwashed masses and run by cutthroats and vagrants. It understands that plays were the rock concerts of their day, and extrapolates that the arrival of Shakespeare was akin to the unveiling of a new sound; one heavier and more affecting than any before, capable of driving crowds into stage-rushing, headbanging frenzy.

To be sure, there are other moments onhand designed to disarm grumpy fans and scholars with giggles of recognition; like flashbacks to De Vere’s youth suggesting where famous characters and events from the plays originated, or mead-fueled arguments between Shakespeare’s contemporaries at The Mermaid Tavern. But it’s this central theme that will probably provide the biggest existential crisis for Shakespearian academics who opt to give “Anonymous” a shot – that a film that tries it’s damndest to put Shakespeare: The Man through the wringer ends up doing extraordinarily right by Shakespeare: The Cultural Force. “Whoever it was that actually wrote this stuff,” it ultimately says, “he kinda rocked.”

The Customer Doesn?t Care About Your Burglar