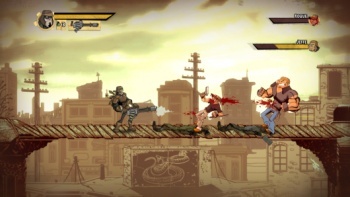 Shank developer Klei Entertainment has clarified that the stuttering and Achievement glitches in the Xbox 360 version of the game are not, as was earlier suggested, the console’s fault.

Owners of the 360 version of Shank, which came out earlier this week, have reportedly experienced stuttering in the game’s video sequences as well as a glitch in how some of the game’s Achievements are awarded. The first problem was apparently simple enough to correct as Klei founder Jamie Cheng said earlier today that a fix is already available to ensure that everyone gets their Achievements. As for the video issue, that, he said, was simply a matter of fragmented disks. “It appears that some Xbox 360’s are having slower disc access rates due to fragmentation, so the opening cinematic chugs, and loading between levels takes longer,” he explained. He also noted that the “game experience” is unaffected by the problem.

I suspect that, not long after his explanation went public, somebody’s telephone rang, or perhaps there was a gentle knock at the door. Whatever the motivation, several hours later the official Shank blog had been updated with a clarification. “I want to be clear: this is definitely not the 360’s ‘fault’,” Cheng wrote. “It’s our own issue, and it took us by surprise because it didn’t come up during certification. Time for us to go a-fixing!”

He further suggested that clearing the system cache may be of some help to people having trouble. “This isn’t a fix (which we’re working on), but hopefully it’ll help some people,” he added.

Shank, a 2D side-scrolling beat-em-up currently available on the PlayStation Network and Xbox Live Arcade, has earned widespread critical acclaim since its release. A PC version of the game is scheduled to come out later this year.