The research for my interview with Ken Levine painted a picture of an artist and consummate intellectual. BioShock Infinite has already been roundly lauded for the bright, “turn-of-the-century America” art design of the floating city of Columbia, and the political themes of Infinite cut extremely close to the bone for American audiences. I thus came armed to the interview with questions meant to elaborate upon this running discourse regarding “the smartest man in videogames.” In foisting this label upon him, however, I wonder if the gaming world has not done Levine a massive disservice. “I’m not going to pretend I’m some omnivore of art,” Levine said. “I was fortunate enough to go to a liberal arts college, where I was exposed to some stuff that I never thought I’d be interested in. I bring that stuff, hopefully, into what I do as a game developer, and mixing the dragons and the machine guns and the laser pistols has been interesting for me as a career.” That may be the truest statement about Ken Levine’s identity as a videogame developer that we’ve ever heard. 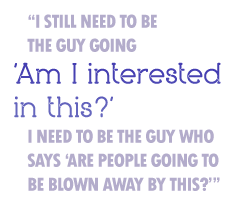 The artistic direction of the BioShock games could be argued as being incidental to the work of creating the most kick-ass shooters Levine can deliver. One of Levine’s chief complaints about BioShock was the lack of tactical variety players were required to exercise. One can imagine him asking how the formula could be changed. Long range combat was fairly absent from BioShock, and combat movement was fairly linear. What kind of environment would allow Irrational Games to add these mechanics? How about a floating city in the clouds, completely open to the sky, with a roller coaster connecting the individual buildings that players can use during combat? This is to take nothing away from the aesthetics and culture of the city of Columbia, but I have no doubt that the gameplay considerations came first. “I find the gameplay to be harder to get right than the other stuff,” Levine said, “so I tend to put a lot of focus on it at the beginning because it’s the part that causes me the most anxiety. I can sit down and write Andrew Ryan speeches all day long. That’s relatively easy. Making sure the weapons feel good and balanced is a much tougher thing for me to do, so I need to spend a lot more time thinking about that problem. Working with my team on those problems.”

The much-hyped cultural literacy of Ken Levine is certainly in no small part responsible for his reputation, but the drive to define him as an auteur may also rest on a fundamental misunderstanding of his role at Irrational Games. We hear “Creative Director” and attempt to apply auteur theory to the man, but to hear Levine explain it, he’s more of an editor. “My job on both the BioShock Infinite trailer and the demo, and working on the game, is to be the gamer seeing it the first time. Being the journalist seeing it the first time. To put myself in that role, and to bring that level of discretion. I still need to see all the flaws. I still need to be the guy going ‘Am I interested in this?’ I need to be the guy who says ‘Are people going to be blown away by this?’ That’s an editorial function to a large degree. If you don’t have that team around you, no matter how good an editor you are, they’re never going to be putting awesome stuff in front of you.”

As part of the ongoing BioShock Infinite reveal, Irrational unveiled a painting of George Washington holding the Ten Commandments and warding off a crowd of foreigners at GamesCom earlier this year. The painting is meant to represent the political culture of Columbia. “I had that idea to do this painting, and I looked at some reference, some paintings that have a similar feel,” Levine said. “Working with the artist to execute that idea took forever, because there are subtleties and details and getting it right, like how caricatured are the foreigners in that, how is George Washington standing, how much text should there be? So, you have me being the editor of that, but then you need artists who are creating the actual assets and going back and forth with you. We showed it at Germany, like all these journalists wanted their photograph under it and everything, but you take the same idea and you execute it wrong, and people would just walk right by it. They wouldn’t give a crap. And by extension, you could say that any element of the game is like that.”

If there’s an artistry to Ken Levine, perhaps it lies less in the Vassar education that informs the palette upon which he lays out a unique selection of thematic paints, but rather in his technical skills of editing together what can be very disparate forms of content in the first person shooter space. “[A first person shooter] has some of the same challenges like a musical has,” he said. “You have people talking, and then all of a sudden they break out into song, right? You have to walk this tightrope to make it believable, to make it work. Shooters have the same sort of problem: you’re telling a story, and then, all of a sudden, you’re mowing people down by the dozen.

“Games need some kind of skill component, at least as I perceive it, or they’re not really games; but you have to have this weird balance where you walk this tightrope of making almost two distinct things [story and gameplay] that have to be integrated, like a musical. You have the same guy directing a scene where people are talking, and then people are singing and dancing. You have to be able to do both things. You need to be able to integrate them as much as you can.”

The challenge of understanding Ken Levine lies in separating the thoughtful observer of video games and game culture which draws upon his liberal education, and the designer who wants to provide hardcore gaming experiences with no concern whatsoever for their artistic merit. Ask Levine about his favorite recent games and he falls so easily into the armchair of the art critic. “One of the games I loved recently is Limbo,” he says. “Either it’s inspired by, or they somehow managed to psychically intuit, German Expressionist films of the 1920s and ’30s. You know, that color palate and that sound design, and surrealist imagery. A game which is basically a platformer, but as an emotional experience it’s absolutely stunning, Because you’re able to tap into a literal and figurative palate that nobody else is playing in, they made this stunning piece of work. What made this game feel fresh is less its game mechanics and more its aesthetic, and that’s because I would guess these people had some exposure to things outside the typical bill of fare of a videogame developer.”

If Ken Levine were the auteur artist that he’s been made out to be, he might be happy only with groundbreaking aesthetics, but he’s a gamer first. “You can make a shooter with great gameplay and a mediocre story and still be somewhat successful,” he said. “You can’t make a shooter with a great story and terrible gameplay.” If there’s any deeper understanding of the man to be had, it must revolve around this hierarchy. That said, Levine isn’t only about challenging himself to make the best games he can, but, also, about challenging perceptions about what gamers want, and so it’s natural to lay the burden of defining the artistic value of his medium upon Levine. “My primary goal is to entertain people. To make something that is going to be important and meaningful to people, and people can approach it and engage in it without feeling like ‘Hey, you can’t come in because you don’t get this.’ That’s the last thing I want to say to people. You look at a BioShock game. Does that seem like mass entertainment? The topic we’re dealing with? Probably not, but I think it’s probably because we underestimate people who want to consume entertainment, that they only want the most banal and basest of aesthetics.”

To Levine, BioShock Infinite is about giving the gamer their money’s worth, not creating his next artistic masterpiece, and he doesn’t buy his own press. “Somebody at my point in my career, maybe people will pay attention to what you do a little more than they might pay attention to someone who hasn’t ever done anything before, but the game itself? You need to prove yourself every time you go out, because you’re asking a lot of people,” he said. “You’re asking people for 60 bucks. That’s a lot of money, man! So, I don’t think you deserve any more trust that people are gonna just play this thing because it’s you. When it comes time to vote with their wallets, I think you’re held to the same standards as everyone else, and you should be.” What defines Ken Levine in the videogame developer space is not a background in the arts, but his self-imposed challenge to push the limits of what can be done with a videogame, not for the sake of an artistic crusade to legitimize his medium, but to deliver a product, which is worthy of our time to play, and therefore his to create.

Dennis Scimeca is a freelance writer from Boston, MA. He maintains a blog at punchingsnakes.com and contributes at Bitmob.com.