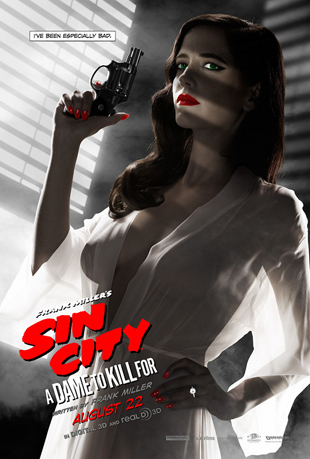 Brace yourselves, readers, for a scandal the likes of which we may never see again until another movie needs some PR juice.

The Motion Picture Association of America has a notorious and well-deserved reputation for complete inconsistency and the application of arbitrary double standards when it comes to rating films and approving marketing. The organization’s process is legendary for being both obscure and obtuse – IngSoc was more transparent, which is why its decisions often cause controversies in and of themselves. That state of affairs has led to a curious kind of marketing in which film productions deliberately attempt to catch the MPAA’s ire, generating discussion and frustration from anti-censorship advocates as well as people who just tire of the way grown adults are treated like children when it comes to American movies.

Case in point, Page Six has reported that, in a shockingly convenient (I’ll get to that momentarily) decision, the MPAA has rejected a poster for Sin City: A Dame To Kill For that features an extremely racy Eva Green looking, well, looking really hot, I can’t lie.

The MPAA’s problem with the poster was, so Page Six says, articulated in delightful, erotica-esque prose: it was rejected “for nudity – curve of under breast and dark nipple/areola circle visible through sheer gown.” In addition to being accurate, that’s also… highly specific. It suggests to me at least that the MPAA spent a lot of time lingering lovingly over the poster, probably using only one hand, taking care to closely examine every offensive detail in order to reach their decision. Smoke break time.

Yes, it’s hard to disagree that this poster goes right up to the edge of the envelope and pushes just barely past it, even if I’m inclined to think that Americans could experience worse traumas than the overt suggestion of stunning breasts belonging to a stunningly beautiful woman. But that’s probably the point. Let’s be real – I’ve talked about this before, but Sin City: A Dame To Kill For is coming out a rather long time after the 2005 original. In the intervening years Robert Rodriguez’s reputation has become a bit campier, and Frank Miller’s has all but been permanently soiled. This movie needs more than just the fond memories of hardcore fans. What better way to draw attention to it than a little “THIS MOVIE MIGHT BE TOO HOT FOR THE MPAA TO HANDLE!”? Hence the fact that this rejection was leaked to the press along with the offending poster.

Mission accomplished: we’re all talking about the movie again.

Too cynical? In This Film is Not Yet Rated, Matt Stone discussed at length how he and Trey parker deliberately made the filthiest possible version of Team America: World Police so that they could make a show of editing it down to the extremely filthy version ultimately released in theaters in order to gain MPAA approval. I can’t imagine there isn’t something similar happening here.

But enough about that, you want to see more of super hot Eva Green, right? Here you go.

Snowpiercer Trailer Puts You on the Train That Saved Humanity

Nintendo is Making a GameCube Controller Adapter for the Wii U