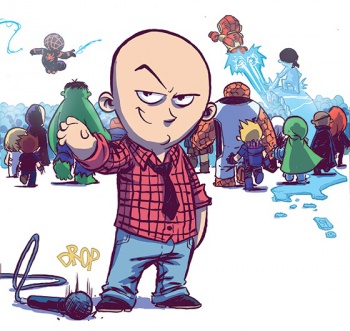 Ultimate End will conclude Ultimate Marvel the same way it began – with a story from Brian Michael Bendis and Mark Bagley.

It’s not a popular franchise these days, but Ultimate Marvel really was something to behold in its heyday. Starting in 2000 with Ultimate Spider-Man before continuing with Ultimate X-Men, Ultimate Fantastic Four, and The Ultimates, this standalone continuity had free reign to redesign superheroes without being tied to a massive continuity. It’s had memorable storylines since (some controversially so), but is best known for Ultimate Spider-Man‘s success and establishing Brian Michael Bendis as one of comics’ biggest names. But with Secret Wars looming on the horizon, Ultimate Marvel is ending the way it began – with a story from Brian Michael Bendis and Mark Bagley called Ultimate End.

If you haven’t been following Marvel Comics lately, there’s been all kinds of dimensional breakdowns, the latest of which puts the Ultimate Earth on a crash-course for Marvel’s Earth. It’s already clear the Ultimate U won’t survive the encounter, so Ultimate End will be a final send-off where heroes face the inevitable. Included in some recently released art is Spider-Man’s arrival in Ultimate New York, while the two Iron Men have a less-than-friendly conversation on how to proceed.

The Ultimate Marvel line reaching its end is a little bittersweet for me. Sure, it wasn’t all good times, but being freed from Marvel’s continuity let it experiment with characters in ways that wouldn’t otherwise be possible. That’s how Marvel was able to kill Peter Parker and introduce Miles Morales, one of the best takes on Spider-Man in decades. It also let the Ultimate U maintain a (mostly) strict policy on dead superheroes staying dead. Outside of establishing Brian Michael Bendis as a force in comics, it proved an ample playground for creators like Jonathan Hickman, Warren Ellis, and Mark Millar. And that’s not even getting into secondary characters like Aunt May and Gwen Stacey, who were absolutely wonderful in this universe – and probably won’t survive the transition.

Still, with the Marvel movies filling that alternate continuity need, perhaps it’s best to say goodbye to Ultimate Marvel once and for all. Ultimate End goes on sale this May 20, 2015.

These Babies in Geeky Costumes are Cooler Than You

8 RPGs that Let You Talk Your Way Through Danger