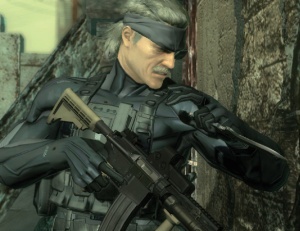 Solid Snake voice actor David Hayter has penned an open letter in response to a recent 1Up article which claimed he was critical of the Metal Gear Solid franchise while speaking on a panel at the recent Anime Expo in California.

According to a 1Up article posted on July 5, Hayter, the man behind the voice of Solid Snake, claimed he was frustrated at times with series creator Hideo Kojima’s “over-the-top scriptwriting and direction,” specifically with regards to the “suicide scene” in which Solid Snake proved unable to kill himself. “I didn’t agree with that at all, and I begged them to change it, but I think it’s still in the game,” Hayter is quoted as saying. “I didn’t buy it at all. I think it’s weak for Snake to be killing other people and then not be able to kill himself when it’s time. If he knows it’s time, then it’s time.”

Hayter also revealed the fact that he had issues with previous Metal Gear Solid games, particularly Snake’s relationship with Otacon, a supporting character. Hayter said the voice actors had a “tough time” getting through the final, vaguely homoerotic cut scene in Metal Gear Solid, describing the episode as “just humiliating.” Despite his criticisms, Hayter did offer praise for Kojima, saying, “I’ve certainly learned things from him, especially about ambiguity and telling a story without giving all the answers.”

But it turns out that much of what Hayter said in the article was either misconstrued or taken out of context, according to a follow-up from the man himself. Hayter sent an open letter to 1Up today in which he clarified many of the statements quoted in the article, as well as his own affection for both Hideo Kojima and the Metal Gear Solid franchise. “Reading the article, I got steadily more infuriated,” he wrote. “It’s not that Mr. (Andrew) Fitch misquoted me, exactly – I don’t believe he did that – but the tone of the article seemed to suggest… that I had serious misgivings about Mr. Kojima’s artistic choices, or that I was somehow resentful of having to perform them. Nothing could be further from the truth, or a more ridiculous misinterpretation of my true feelings.”

“I don’t believe I used the word ‘frustrated,’ and the description of Mr. Kojima’s work as being ‘over-the-top’ is entirely Mr. Fitch’s wording, not my own,” he continued. “I believe Mr. Kojima to be a true genius, and I regard his artistic choices as sacrosanct and entirely justified in every sense. It is his game, his world, and if he says that Otacon and Snake ride off into the sunset together, then that is the exact, right choice.”

Hayter claimed that one of the reasons he avoids many public appearances is his “acerbic” sense of humor, which sometimes leads to him saying things that get taken out of context. He admitted to calling the final Metal Gear Solid scene “humiliating,” but claims the statement was made as a joke in light of the unintentional humor of the encounter between Solid Snake and Otacon. “Doing that scene was actually really fun in the booth, and those of us involved in the English voice recording of the games look back on it with great fondness,” he said, explaining that the “tough time” was the result of trying to get through the scene with Otacon voice actor Christopher Randolph “without breaking into uncontrollable giggling.”

“Look… I am not calling out Mr. Fitch. He wrote a fine article with many valid points,” Hayter wrote. “I just felt that the tone of the article might have been a little more inflammatory than the intention of the actual comments themselves. Given my aforementioned acerbic delivery, I take equal responsibility for that interpretation.”

“Please read the article and decide for yourself,” he added. “You can also watch videotapes of essentially the entire panel on YouTube, hear the exact comments, and again, decide for yourselves as to what my real intentions were.”

1Up’s original coverage of David Hayter at the Anime Expo is available here, while Hayter’s response to the article can be read here.