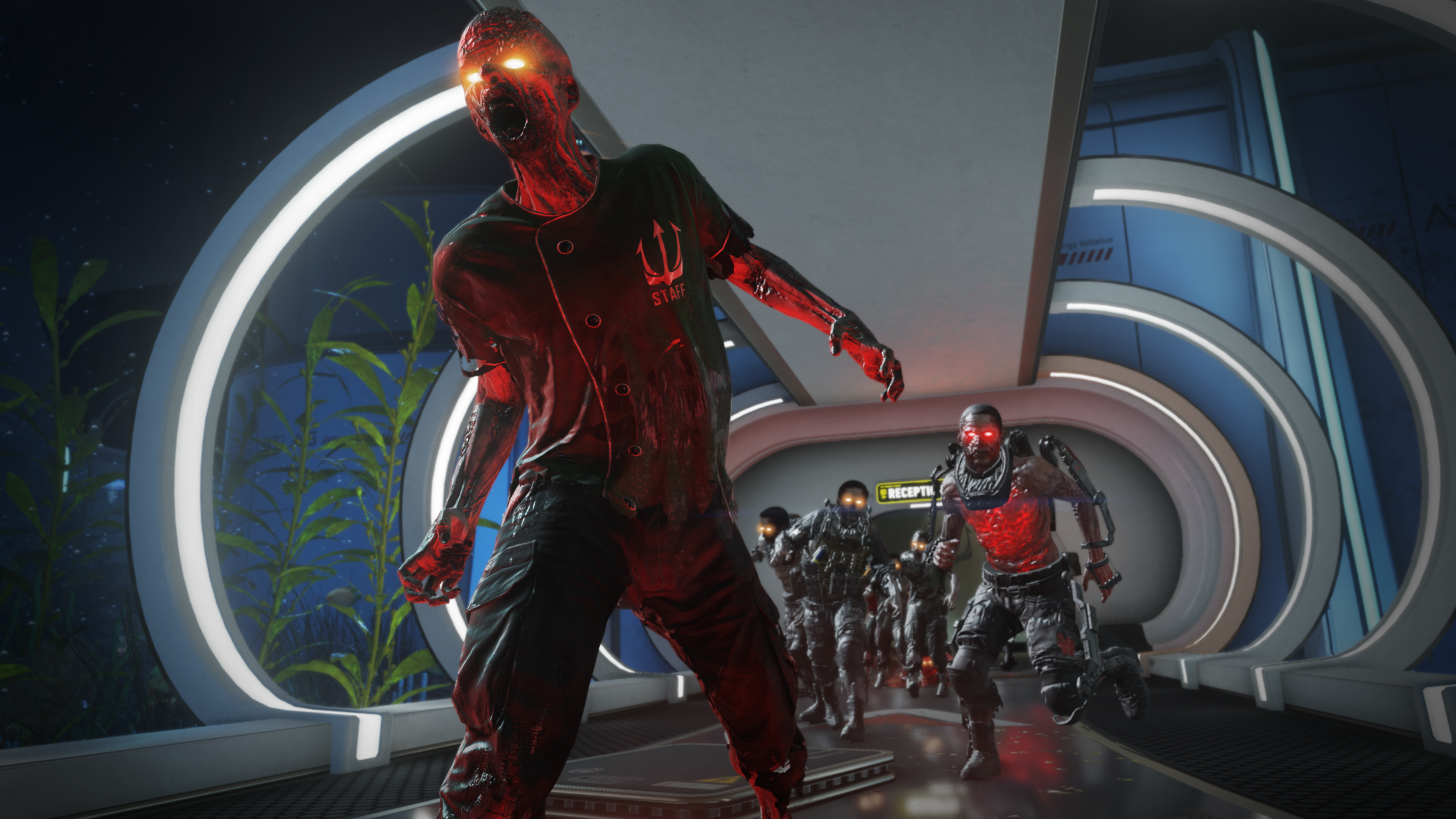 Go for a surprise trip down memory lane with the final Advanced Warfare DLC map for Exo Zombies — Descent. Like all of these add-on coop survival stages, you’ll have to complete a massive Easter egg to unlock the true ending and escape. Learn how it’s done with the complete step-by-step guide below.

In Descent, you and your remaining teammates infiltrate a secret Atlas resort situated somewhere in the middle of the ocean. Your former ally Oz has turned against you, and if you can manage to best his challenges, you’ll travel through a very unique portal. Not only that, it’s possible to unlock a hidden hard mode that’ll test the skills of even the most skilled zombie enthusiasts. Check out all the details right here.

See what it takes to complete the first Exo Zombies DLC with the “Game Over, Man!” Advanced Warfare Easter Egg Guide, or learn about the Descent Secret Song on our collectibles locations guide.

To start this lengthy Easter egg, open the doors to the Tidal Generator room. There’s a large spiral staircase leading around the room to the upper exit to the exterior. Stay inside and look along the curved walls for valves. Shoot these three valves with automatic weapons until the light directly above the valve turns blue. It takes a lot of bullets, but keep shooting and they’ll eventually activate.

Enter the Lounge and look for a locked door leading out to the ocean. It’s yellow-rimmed with glass like an airlock. The door is right next to one of the 3D-Printers.

Hold down the action button to slowly fill a “Depressurizing” meter. You won’t be able to shoot or fight while attempting this, and it takes a long time to depressurize. Save this sequence for the end of a round or if you’ve got plenty of friends for backup.

The depressurizing progress will save if you leave, so just return and continue to fill the meter later if you’re jumped by zombies. Once the door is depressurized, don’t go through it just yet.

Instead, go to the exterior areas and wait for random Atlas drops. You’ll need to check these until you get a Goliath Suit. Return to the depressurized door, and use it to get outside.

Turn left and punch through the sinking zombie. There’s a bright red button at the end of the path. Use it and the light will turn blue.

During this special challenge, the drones won’t be carrying any treasure. Instead, they fly toward the exterior and attempt to fly away. Bring fast-firing weapons with upgrades to bring them down fast.

Return to the Galleria and you’ll find some strange new machines near the broken aquarium with the first secret song manta ray. The devices have meters and numbers you’ll need to make reach 100.

Wait for EMZs, the electrified zombies, to hit you while standing near the capacitors. Instead of taking damage, the machine will soak up the electricity and kill the zombie. Lure about three EMZs close and let them absorb the power to complete this step.

Next up, Oz gives you the Grenade Challenge at the start of the following round. This challenge is pretty straight-forward; you have unlimited grenades but cannot use your primary (or secondary) weapons. This is a grenade-only round.

Switch to Contact Grenades to make this section a little easier and throw as many as you want. All you have to do is survive the round to complete this challenge.

Go to the Spa room and step out onto the balcony overlooking the ocean. Once the Grenade Challenge is complete, you should see floating blue neon square platforms above the water. Do what Mario would do and get jumping.

Jump on each platform until you reach the last, larger, square to reset the puzzle and start again. There are about eight different variations to complete, and obviously you’ll need an EXO suit to complete this step. If you screw up and fall into the water, you won’t die — instead, you reappear in the spawn area safely.

Another new round leads to another Oz Challenge. This time you’ll have to deal with the Move Challenge, where your movement will be severely restricted. Any movement you make will take points off your final score — the goal here is staying as stationary as possible for the full round. If your points reach zero, you lose the challenge and must start over next round.

Go to the Reception lobby area and look on one of the Trident desks. There are four computer terminals lined up in a row. Watch them, and you’ll see lights flash on in a simple pattern. Follow the pattern and activate the terminals in the order they’re shown. You’ll need to complete several instances before Oz gives you an audio cue and unleashes his next challenge.

This challenge is pretty self-explanatory; friendly-fire is activated during the start of the following round once the Simon Says game is completed. All you have to do is complete the round without downing any of your own teammates.

If you’re playing solo or without a full team, AI bots will spawn into the map and help out. These bots can shoot you, so watch out

Next round, return to the Tidal Generator room and check out the wall to the left of the terminal you activated in Step 1. There is now a board filled with numbers; the top numbers stay the same, but the bottom numbers change depending on your actions in the map.

Complete the indicated actions above so that the bottom row matches the top row. After pushing a number over 9, it will reset to 1. Keep that in mind while trying to match the passcode.

You’re almost there! Once the numbers match up, start a new round and Oz gives the Rocket Challenge. This time, you’ll gain a MAHEM Launcher with unlimited rockets and no access to standard weapons. Like the Grenade Challenge, all you have to do is complete the round with only infinite rockets.

That’s the final Oz Challenge, but there’s still one last step to complete to get the Easter egg ending.

Now it’s time to return to the blue terminal in the Tidal Generator room. Activate it to teleport to a unique area… Oz’s memories! This tiny fragment of an island in the void looks just like the spawn area in the first Exo Zombies map Outbreak.

A conversation continues as you defend the area against waves of zombies. Keep fighting until the achievement / trophy finally pops, and you’ll unlock the Double Feature[/b] — an even harder version of Descent.

[i]Kevin Thielenhaus is a freelance writer for The Escapist. Find him on Twitter here.

Grab 32 GB of Storage in a Colorful, Building Block-Themed USB Drive for Just $22