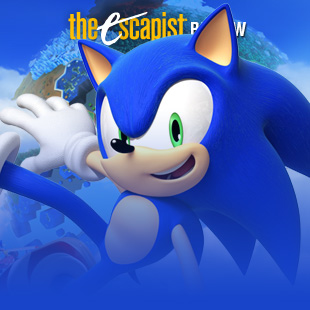 Sonic Lost World is not the triumphant return to wonder, grace, and awesome innovative play that some had hoped. It is a reminder that you cannot take old mechanics, old gameplay, and repackage it forever expecting it to be fun and fresh.

This is the absolute truth: Sonic Lost World is a beautiful game by nearly any measure. It clips along with no camera problems and no perspective problems. The environments are constantly new and interesting on every level – you go from running through abandoned temples to clouds of flying candy in a single world. Each level is full of interesting, unique models, and there’s enough variation between 2D and 3D platforming that you don’t get bored on account of repetitious gameplay types. The models for Sonic, Tails, the Deadly Six – every character and enemy – appear to be animated flawlessly. The things they do are timed to look good from both a visual and gameplay aesthetic, with bosses appropriately telegraphing their attacks. The only thing about the surface of the game that’s mediocre is the music – it’s not bad, but it doesn’t stand out.

All of the game’s looks are shiny, solid, and, at least interesting. But that doesn’t mean much of anything when you stack it up against the shallow, tired old game beneath.

Don’t be confused here. When Sonic Lost World is good, it’s damn good. Some levels will have you humming beautifully along, frantically changing paths and directing Sonic from path to path while smashing enemies for points and collecting rings. They’ll hit you with sudden changes to other game modes, like enjoyable flight and rhythm sections that then transition back into platforming gameplay seamlessly. But the game clicks in too few places. Even fun levels that flow well will suddenly transition to a frustratingly difficult segment that relies on precision from the sluggish controls. That’s not to say the game is too challenging, even though one of its strengths is that it doesn’t pull punches. The levels can be challenging during the engaging, interesting high speed parts, and even during some of the low speed, platform heavy sections, but it generally fails to be both good and challenging when the controls are the point of difficulty. Games like Sonic Lost World should be praised for their variation of difficulties throughout without feeling inconsistent. It is, to put it succinctly, appropriately difficult.

Lost World has an underlying, stiff, jerky problem. The controls, the concept, the very things that should innovate and change and make it fresh, are simply mediocre. They’re not only mediocre, they’re old and mediocre. When the game tries to vary the speed from constantly moving, fast paced, route picking speed, it’s painfully obvious that the controls simply weren’t designed for this. Actually, it’s painfully obvious that the controls are from another generation of games entirely. As soon as you’re moving at anything slower than an out-and-out dash, Sonic feels unresponsive and stiff. He’ll often slide into a ledge and grab on, but he’s just as likely to not, by some unnoticeable difference of a pixel or three. And you’re out of luck if you want to have any control over the direction of your fall outside of the very specific freefall level segments.

The story – as has been the case for some time in Sonic titles – is cringeworthy, feeling like an artifact from the worst of children’s TV, where adults aren’t expected to enjoy at all. The voice actors, you can tell, are doing their best with the script they’ve been given. They do well, but no amount of well can make up for what’s bad about this game.

This game is chopped up into neat little segments. Some are fun, some aren’t – they’re all beautifully rendered. Much of it feels deeply dated. There’s just not much new here. While the developers made a big deal of wallrunning and “defying gravity,” they don’t feel like wondrous, new things. It’s a rehash of what made Sonic awesome in 1991. It’s not a videogame from 2013. It controls like a game from 1991, it has gameplay like a game from 1991. Warts, blemishes, sluggishness and all. It is, by all measures, an astoundingly average game.

Recommendation: This one’s for the Sonic fans and those hungry for another platformer, everyone else, skip it.

This review is based on the Wii U version of the game.