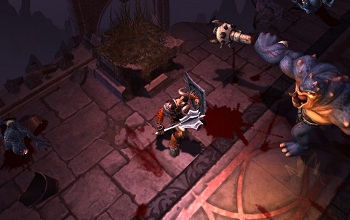 At its 2011 E3 press conference Sony showed off a little game by the name of Ruin. A Diablo-esque RPG it was revealed to be in the works for both the PS3 and the Vita. This dual development was, in turn, explained to be an intentional move that would allow gamers to utilize a feature we’ve now come to know as Cross Play. While Cross Play has since become a regular fixture of PSN titles and indie games shared by the PS3 and Vita, Ruin, eventually renamed Warrior’s Lair, has been nowhere to be found. Now, it has unfortunately been confirmed that Warrior’s Lair is no more.

“Sony Computer Entertainment can confirm that Warrior’s Lair for PS Vita is no longer in development,” said a Sony representative. “We apologize to those who pre-ordered the title and ask that they contact their retailer directly to cancel their pre-sale.” Sony, likely trying to do a bit of damage control in light of the cancellation, went on to highlight other upcoming Vita titles. “The line-up of PS Vita first-party and third-party content remains strong with more than 85 titles scheduled to launch for the system by the end of 2013 including Killzone: Mercenary, Tearaway, Doki Doki Universe, Batman: Arkham Origins Blackgate, Flower, The Walking Dead, and more.”

Even if the Vita does have some quality games on the horizon, it’s still somewhat disappointing to see Warrior’s Lair fail to come to fruition. While the PS3 version of Diablo III will likely satisfy console gamers’ urge to dungeon delve, a solid loot-centric RPG could have been a real boon for the Vita, which could arguably still benefit from some expansions to its library.

Warcraft Movie Studio Is Still Trying To Figure It Out