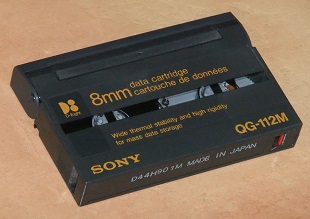 Over 40 times more storage than your precious 4 TB hard drive, in cassette form.

Sony just shattered the data tape record, as it managed to create tech for a 185 TB cartridge. That’s an incredible leap over the typical 2.5 TB capacity seen in data cartridges today.

IT World says Sony has new tape with capacity at “…148 gigabits per square inch, roughly 74 times the density of standard tapes”

The new tapes aren’t for sale just yet — this is all in the prototype/R&D phase still — but if they’re ever released, these tapes could house 185 TB of uncompressed data, or up to 370 TB if the data is compressed.

The last data storage record was set by IBM, who created a 125 TB prototype back in 2012.

Tape storage might not be a powerhouse in the consumer space, (and yes, it’s weird that we’re talking about data tape storage on The Escapist, but it’s cool, so pipe down), but thousands of companies still rely on magnetic tape cartridges for cheap, reliable data housing. How cheap? A 2.5 TB Sony tape costs under $62 on Amazon. Tape isn’t the fastest form of storage, but it’s incredibly reliable and long-lasting, making it a favorite medium for data archival and IT departments.

Norwegian Army Tests Use of Oculus Rift with Tanks