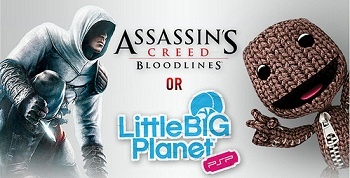 When it was first revealed that Sony was giving away free games again with the purchase of a PSPgo, the three or four people that bought a PSPgo this month must have emanated quite a cheer. LittleBigPlanet PSP and Assassin’s Creed: Bloodlines were the giveaways this time, but Joystiq has discovered that the promotion comes with age-restricting rules.

New PSPgo purchasers will not be given a choice between the two games. Instead, Sony will be providing a code to download one of the two based on the age of the new PSPgo owner. If you’re 17 or older, you’re stuck with Assassin’s Creed: Bloodlines, even if you hate action games and love platformers such as LittleBigPlanet PSP.

SCEA writes: “The game sent to consumers is determined by age, once the user creates/logs into their PlayStation Network account.” I get wanting to make sure that those under 17 do not get their hands on the brain-altering Assassin’s Creed: Bloodlines, but not the forcing of it upon people that might want to have fun with a Sackboy instead.

LittleBigPlanet PSP would probably be my choice here, as the PlayStation 3 version is the bee’s knees. However, I would get totally screwed if I bought a PSPgo, because I have the unfortunate condition of being older than 17 Earth years. Well, not really totally screwed, but at the least Sony should give those 17 and older a choice between the two games, though the younger can understandably be stuck with LittleBigPlanet. While I’m not one to complain about a free game giveaway, the age restrictions put on this one might upset a few people rather than please them, because we all know how people are.