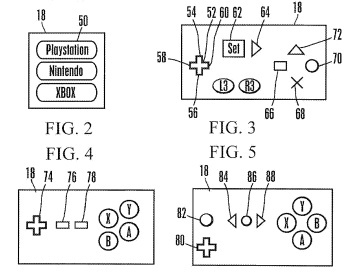 Sony has filed a patent for a universal game controller that will also work with Microsoft and Nintendo consoles, and configure its buttons differently for each.

“Just like remote controls, game consoles, and thus game controllers, are becoming widespread,” Sony wrote in its patent application for the new controller. “It is not surprising to find more than one game console in a household, especially when competing game console manufacturers attempt to attract unconventional consumer groups in the gaming industry. As understood herein, it would be useful to have a universal controller that would be able to work with a variety of game consoles.”

The controller uses an LCD touch screen rather than conventional buttons, allowing it to display different layouts depending on the console it’s connected to. As well as being compatible with current-gen hardware, the application states that the device will also be designed to work with older consoles and function as a virtual keyboard.

“The controller provides for backward compatibility so that it may be programmed to emulate the key layout of an older controller that may no longer be available, so that an owner of an older game console can still use the console,” it says. “Further, in addition to action and navigation symbols the display can present an image of a keyboard that can be manipulated to input alpha-numeric characters.”

Other features the device may offer include wireless operation, vibration feedback, internal storage and more. It all seems very hypothetical at this point and it’s probably safe to assume that it’ll be a long while yet before you’ve got a Sony controller plugged into your GameCube. It’s an interesting idea, though, and could prove to be a Godsend for people tired of looking at the big pile of controllers sitting on the coffee table.

via: TheSixthAxis, with thanks to ColdStorage for the tip