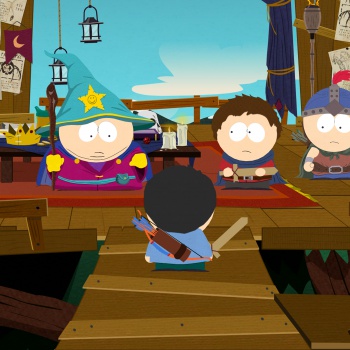 “Oh my God! They might have killed the South Park RPG!”

Things continue to get complicated for floundering game publisher THQ, as South Park Studios has filed a court objection to forbid the sale of South Park: The Stick of Truth unless THQ meets several conditions during its upcoming bankruptcy hearings.

South Park Studio, which owns the license to the animated series, first filed the objection on January 18th, stating that it had first entered into an agreement in June of 2011 with THQ regarding the use of South Park in the upcoming Stick of Truth RPG. This agreement, referred to as the “Deal Memo”, apparently forbids THQ from handing off the game or its South Park license to another company unless South Park Studio consents to such an arrangement. In addition, the Deal Memo also allows South Park Studio to repurchase “all elements of the South Park game and related products” provided it pays THQ an amount equal to whatever funding and costs it accrued while developing the title.

The objection itself asks the court to prohibit The Stick of Truth‘s release unless South Park Studio is allowed to consent to any transfer of the South Park license it originally granted THQ on top of both $2.275 million dollars and “adequate assurance of future performance” for the game.

THQ submitted a reply on January 21st to South Park Studio’s allegations, arguing that the license in question is eligible for sale under the Copyright Act of 1976, but is currently reviewing whether or not South Park studios has any valid claim to monetary compensation.

South Park: The Stick of Truth is currently scheduled to release on March 5th of 2013 on multiple platforms, although with THQ’s ongoing financial issues and South Park Studios’ lawsuit, that seems very likely to change.