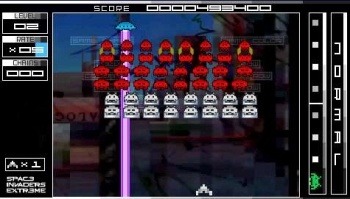 A Space Invaders movie is in the works, whether that makes any sense or not.

For anyone that wandered into this article by accident, Space Invaders is an arcade game released in 1978 about a group of aliens that slowly move back-and-forth and downward toward the player’s ship-tank-shooty thing. Not exactly something that you can make a movie out of, right? Wrong.

Heat Vision reports that producers Lorenzo di Bonaventura, who has worked on Transformers and G.I. Joe, and Gigi Pritzker, currently working on the Ender’s Game movie, have optioned the rights to create a film based on the classic arcade title. They’re searching for a writer that can somehow create a story around a game that has absolutely no story.

Optioning Space Invaders isn’t necessarily a stupid move, as the game has a ton of name recognition. However, more likely than not it’ll be your typical alien-invasion flick with exploding buildings (one of them probably the White House or the Empire State Building) and a single human that turns the tide against the foreign invaders with heart and bravery.

It’s as if someone optioned Pong and turned it into a heartfelt drama about two tennis players that go through hardships and eventually face each other at Wimbledon. You’ve basically attached a popular name to something that has absolutely no bearing on the content inside of the product. Consumers are (typically) smart enough to stay away from things like that.

Bonaventura also has his hand in the pot of the Asteroids movie, another classic arcade game being brought to the big screen. Maybe if he combines the two, and a bunch of other classic games, something worth watching might be created. Now that could be cool, but I’ll need a producer credit.