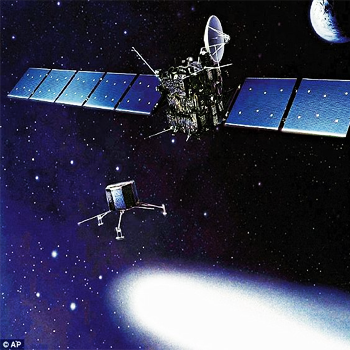 Rosetta probe’s Philae lander is on its final approach to its target comet’s surface.

Update: While Rosetta and its Philae lander have successfully contacted the comet, the probe and the ESA are not quite out of the woods.

The Planetary Society’s Emily Lakdawalla is tweeting from the ESA control room, and her reports indicate that Philae isn’t securely embedded into the comet. After landing on Comet 67p, Philae was supposed to fire anchoring harpoons into the surface of the rock. Those harpoons did not fire after landing, nor is the hold-down thruster working.

While mission control is still figuring out these issues, and how to deal with stability going forward, the good news is the scientific instrument suite appears to be green across the board. Data is coming back from the comet, which is definitely a win.

In related news, the Space Foundation has issued an official high-five to the ESA, praising the Euro space programs involved for “achieving yet another milestone during this ambitious mission.”

Original Story: The ESA space-probe Rosetta is nearing the conclusion of its decade-long mission to track and land a probe on the comet 67P/Churyumov-Gerasimenko: Rosetta has deployed its lander, Philae, for descent to the comet’s surface.

Rosetta was launched in 2004, and needed to orbit the Earth a total of three times in order to attain speeds necessary to catch up to and align orbits with Comet 67p. The probe has been in a kind of pseudo-hibernation for much of its journey in order to preserve power (it generates electricity from solar power, but would’ve been out of range of the sun for much of the mission) but “awoke” last January as it began its approach toward the comet.

If Philae successfully makes permanent contact with the surface of its target (not guaranteed, as the craft reportedly has issues with it’s thruster system) it will be the first spacecraft ever to land successfully on a comet – though NASA purposefully crashed a probe into one in 2005 in order to examine the celestial body’s core. Scientist’s believe that study of comets will allow them to observe “ingredients with which the solar system formed,” among other data.

Devin Connors contributed to this report.

MethanCity LARP Explores Fighting for Human Survival in a Wasteland

Obama: FCC Needs to Reclassify Internet as a Utility – Update 2