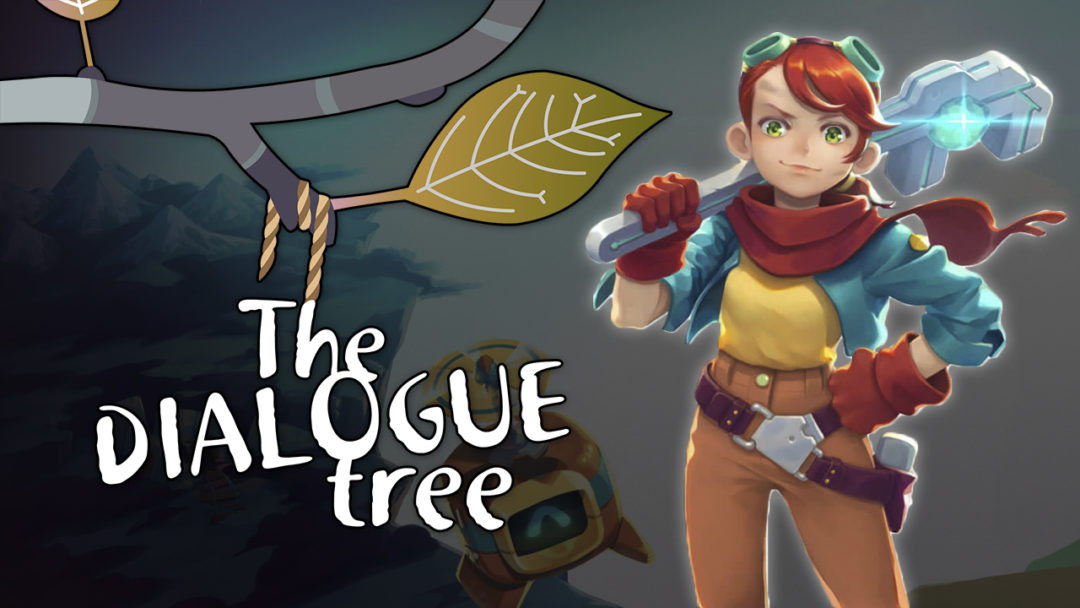 Lucas Rowe, his brother Edward, and their partner Kevin Mabie have spent the last four years developing Sparklite, an action RPG with roguelike elements and an environmentalist storyline. Sparklite is the story of Ada, a teenage engineer who gets embroiled in a global struggle over the titular energy source. The peaceful denizens of the world of Geodia harness the power of Sparklite ore responsibly, living in equilibrium with nature. But a self-appointed Baron has discovered that mining and burning Sparklite produces massive amounts of energy, along with planet-rotting pollution. So it’s up to Ada to foil the Baron’s industrialist ecocide.

“We don’t want to shove it in people’s faces; that’s not something that’s great to do,” said Mabie of the game’s environmentalist leanings. “But we do share our concerns about today’s modern problems. So we’re toeing the line, trying to get people to think about these types of issues.”

The Sparklite core at the heart of Geodia has a defense mechanism: It can cause Fractures that rearrange the world, temporarily thwarting attempts to extract the mineral from the ground. Ada’s quest will see her going back and forth between her floating city headquarters and the surface of the planet to explore and gather resources. But every time she descends to the surface, it will be completely rearranged.

“I would describe it as like Zelda with a randomized overworld,” said Rowe.

The team isn’t describing Sparklite as a full-blown roguelike, but the game takes inspiration from recent indie gems with randomized environments, loot collection, and incremental character upgrades. Play sessions are divided into short runs that take place in one of Geodia’s five polluted biomes. On a run, Ada can battle mutated wildlife, complete quests for support characters, and gather precious Sparklite. The major difference between Sparklite and pure roguelikes is that in Sparklite there’s no lose-everything permadeath.

“We actually call it ‘permalife,'” Rowe explained. “You never die. You keep all your progress, for the most part. So it really plays more like an RPG than a roguelike.”

“We really liked Rogue Legacy‘s model, where you get to keep some of your progress when you die,” Mabie continued. “You never really feel like you invested a half hour and didn’t get anywhere, like, ‘Oh, I lost the run. I guess I’ll start over.’ People who are turned off by that feeling, we’re hoping this game will appeal to them.”

When Ada is defeated during a run, she’s scooped up and rescued by her airborne home base. From there, she can invest her spoils in expanding the town, upgrading her arsenal, and better preparing herself for future excursions. Town-building will be a persistent mechanic throughout the game. Ada’s headquarters can be filled out with numerous structures that offer different bonuses and functionality, and each structure can be upgraded multiple times to improve its effects. A widget building will offer to sell Ada potions and other consumables, the workshop can be used to build and upgrade weaponry, and a bestiary headquarters confers bonus damage against certain enemy types.

One of these buildings, the med bay, can expand Ada’s patch board. Ada begins Sparklite with a 3×3 board into which players can slot patches that confer various bonuses — increased health, attack damage, defense, things like that. More specialized patches can be found on runs, and unique patches can be earned by completing NPC quests. Satisfying the whims of a pair of twin explorers, for example, will earn Ada a patch that upgrades her map to reveal valuable details. Upgrading the town’s med bay will expand Ada’s patch board, enabling players to assemble more expressive character builds.

In addition to modern indie roguelikes, Sparklite is drawing a lot of inspiration from retro classics, especially for its visuals and music. The game’s pixel art aesthetic began out of necessity, as Mabie and the Rowe brothers are all coders with minimal art experience.

“We felt like programmers could probably do pixel art to a certain level,” said Mabie. “And we were totally wrong. Once you get a real artist in there who knows what they’re doing, it’s no comparison.”

The Red Blue team discovered Swedish pixel artist Anders Gullmarsvik through Twitter and commissioned him to mock up a proper look for Sparklite. The result blew them away. Recognizing that a game this handsome would lead people to have certain expectations about its overall quality, the team began furiously improving every aspect of the game to meet the standard set by the new visuals.

Sparklite‘s graphics are inspired by, but not slavish to, the conventions of classic adventure titles, particularly the Legend of Zelda series. The game’s music will have retro affectations too, though it’s shooting for a different era. Wizard of Legend composer Dale North is assembling Sparklite‘s soundtrack. At first he was developing a classical, orchestral soundscape for the game, but early in the process he shelved that work for something with stronger video game roots.

“The whole soundtrack is scored in the old MIDI programs that were around during the GameCube era,” Mabie explained. “So instead of a full-fidelity violin, or flute, the sound resembles what was available back when the GameCube was around. It sounds… it’s hard to describe. It’s a little tinny, you know? Like, you know it’s a flute, but it’s not like a lifelike flute. It helps fit the retro style of the visuals.”

Those kinds of connections between past and present, retro and modern, are a unifying theme of Sparklite. The game’s story of a tyrannical industrialist destroying the planet for personal gain was even once intended to be more expansive, spanning industrialism and technology from the Gilded Age through to modern times. There would have been different biomes to match each period, culminating in modern conflicts with “the Mark Zuckerbergs of the world,” according to Rowe.

However, concerns over the game’s scale forced the team to whittle Sparklite‘s rogues’ gallery down to a single villain. This meant cutting out a proposed modern tech biome with a boss-on-roller-skates fight, which was strangely inspired by Google cofounder Sergey Brin’s high-octane life style. But Mabie said that future updates to the game — or a sequel, should it perform well enough — could result in cut content seeing the light of day after all. 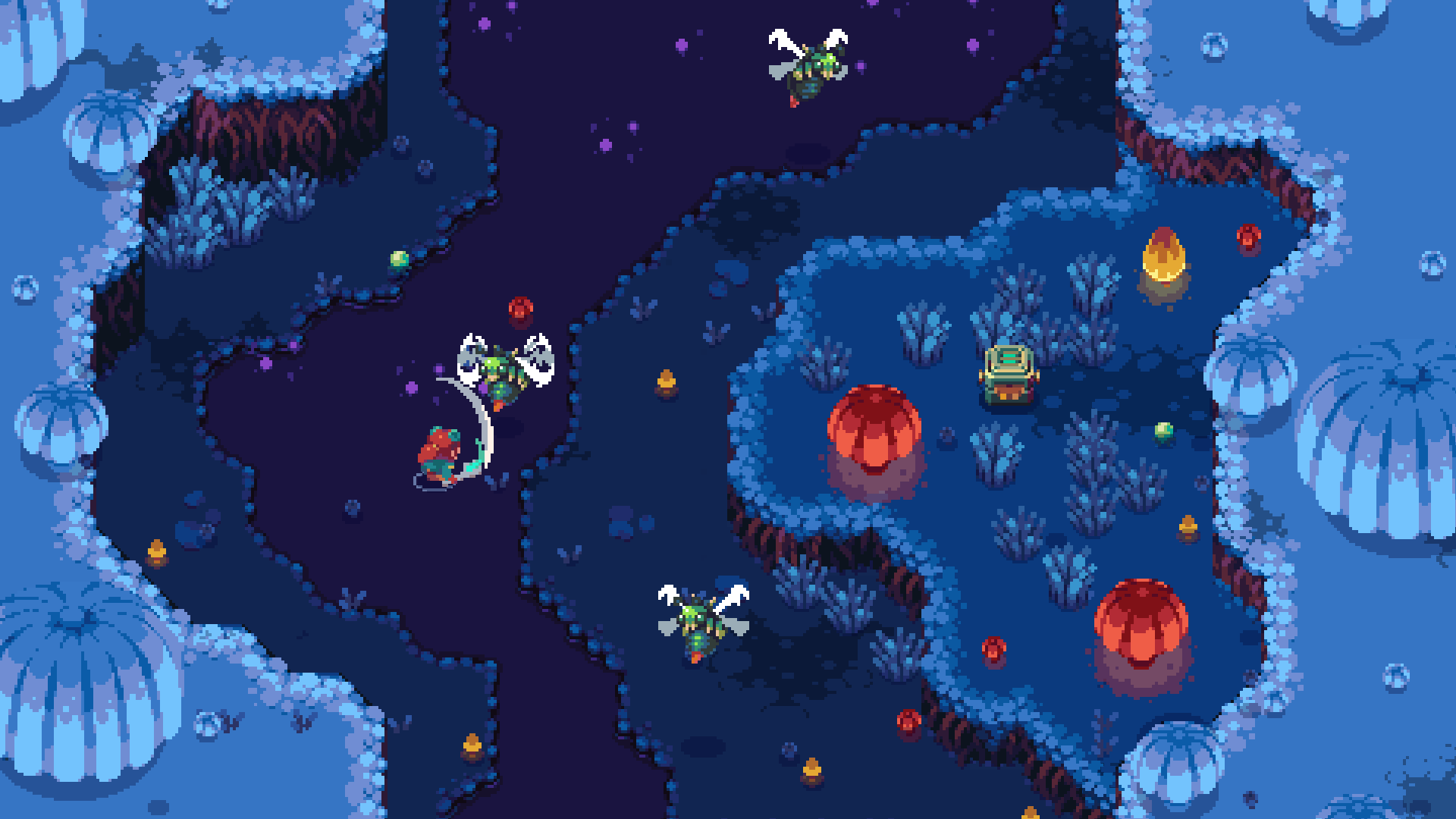 Mabie also proposed that Sparklite is forging a connection between two irreconcilable design principles. He described the game’s marriage of deliberately authored adventure gameplay to the organized chaos of procedural generation as something no game has ever satisfyingly pulled off.

“Those are two completely competing genres, and we are trying to wrangle them together into a new experience that people haven’t played before,” he mused. “So people who like Zelda, they’re attracted to the game based on the adventure feel, and the light narrative we have. People who like roguelikes or procedural games might be attracted to the fact that it’s run-based, and you get to gradually accrue progress. So we’re taking some things that conventionally would never be combined and combining them to see if we can make something people have never seen.”

Sparklite comes to PlayStation 4, Xbox One, Switch, PC, and Mac on Nov. 14.